Sinning or singing? The transition from one note to another on the same string without a break is a peculiarly sensitive topic, as seen in these clippings from The Strad archive 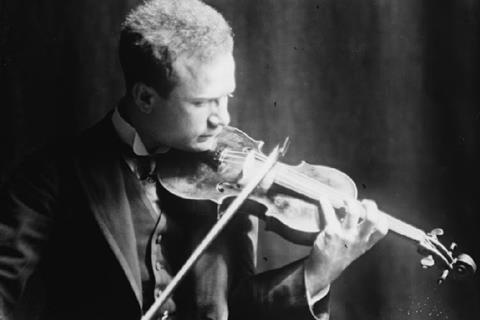 ‘When a singer slides beautifully from one note to another it is permissible. Why then object when a violinist does it?’ – Mischa Elman

As I see it, the great players of the past used downward portamento in three ways: for transport from one note to another; for joining up the notes into a coherent phrase, as a singer would do (hence the expression ‘breath glide’); and for expressing spontaneous emotion. I suppose it is this expressive portamento that attracts the most opprobrium today, and I have to concede that Huberman sometimes executed it in an ugly way. Tertis at times went too far on the viola, Sammons on the violin – although I love them both dearly. For my taste, Kreisler, Busch, Thibaud, Szigeti, Morini and Casals all managed it pretty well. The old-timers often avoided the even-numbered positions and worked on the principle of ‘one phrase, one colour, one string’, a maxim that still has validity. String playing has undeniably progressed since the dawn of recording, yet we should not throw out the connective-portamento baby with the expressive-portamento bathwater.
…
When his concentration lapsed, Huberman could create quite ugly effects, especially with his portamento. I sometimes wish he could have stayed off the G string altogether, as he often made a horrible, smeary sound on it – he never entirely came to grips with the subtleties of vibrato. He could be a saint one moment, a sinner the next.

And what of feeling in music? Here lie the unpredictable elements, the ever-changing expressions of the yearning human heart – not the province of the ordering mind. Again, though essentially indefinable, definition may be attempted. I have done that, tongue in cheek, in my writings. In portamento, vibrato, in the suspense at the climax and the low point of a phrase, in the variability of speed and dynamics, we are expressing a basic need in the human condition – a need to be free from the trap of classification and strict formal structurings.

Recorded performances, captured in a moment of time, can inform our playing – but they can also become embedded in our minds and shape our sense of a piece. At its most benign, this may mean we copy a ‘magic moment’ that another performer has found in a note or a phrase; but this can easily become unconvincing affectation. I have often heard the elegant Heifetz portamento between the first and second notes of Saint-Saëns’s Introduction and Rondo Capriccioso caricatured by players who could be great versions of themselves, but instead have become rather unconvincing Heifetzes.

On the Korngold Violin Concerto:

This music offers you abundant possibilities and freedom to use portamento. We’ve got into a terrible habit of calling the connection of two notes in the left hand a ‘glissando’, which is something completely different, or a ‘slide’, a cheapened way of describing portamento. The word portamento comes from the Latin verb portare, ‘to carry’, which is a more apt description and forces you to think of which note you want to carry to which other note. This is determined either by the tension of the interval or by the harmonic progressions involved. You have to know why you’re using portamento – it should never be just for effect. Listen to Milstein’s incredible use of it, or to Menuhin, who could apply five different types of portamento within one phrase. Today portamento is done in oblivion or it’s frowned upon, but if done tastefully it’s nothing other than a way of connecting notes organically, as a voice does.

At the turn of the 20th century early recordings of Sarasate, Kubelik and others give evidence of a preoccupation with technique; it was Eugène Ysaÿe whose poetic approach to the gliding technique made the violin sing like the human voice. His few recordings demonstrate his excessive use of portamento.

In my youth I attended many performances by these great players. I would sit in the first or second row, studying every move, and tried to emulate what they did when I got home. What I learned from all these great artists was that you must never press the fingers of the left hand in affecting a slide, and you must make sure the bow speed is equal to the speed of your slide.

On early recordings of the Mendelssohn Violin Concerto:

To say that Huberman was a controversial violinist is something of an understatement, and his 1924 Andante shows the liberties he was prepared to take in cutting the score down, many of which were not really necessary. He cuts repeated phrases, changes registers, adds octaves, and on occasion even alters the odd note here and there. Though his vibrato is quite intense, his scooped slides and highly individualised version of the score show his roots to be in the 19th century.

It must have been the less successful renditions of passages like these that drove Carl Flesch to extol the virtues of a selective approach to portamento. Flesch explicitly marks ‘ohne glissando’ at two points in his 1927 edition, and gives fingerings that produce economical shifts, avoid unwanted accents and conceal audible changes of position. Yehudi Menuhin’s 1938 Andante and finale exemplify this kind of approach. His shifts are deliberately well hidden and his portamento is essentially the same as that which the modern violinist might use.

On playing the solo violin part in Rimsky-Korsakov’s Sheherazade:

I’m not afraid to use portamento in the right places. It brings the violin a step closer to the natural inflections of the voice, which is neither sharp nor angular. I want my audience to hear the seductive tones of a woman, and not an inanimate piece of wood.

Kulenkampff [Ricci’s teacher], being of the German school, used position changes rather than slides from underneath the note. For example, he would slide with the first finger most of the way and then put down the third finger – he didn’t put down the third finger before the note. This is in contrast to the Russians, who would go from underneath. For example, the Russians would put the finger down underneath the note and then go up to the note.

When I was young, I had an idea that I wanted to be a very clean player and avoid portamento. So I didn’t do any slides. I tried to play like a piano. Later on, I used the slide because the slide provides an advantage if you want to emphasise a note – you can emphasise a note better if you slide underneath it a little bit. However, sliding is a dangerous privilege. A slide can easily become a smear, which is bad taste. I don’t like fiddle players that smear around too much. You can play without slides but once you put them in, you have to be careful how you use them. You should only use the slide to emphasise a note.

Kreisler made good slides. I liked his taste. When he got older, his playing got a little bit too sweet but then again, he was a very sweet guy.

Those big, sausagy fingers sometimes got in a tangle, especially in Busch’s last decade, when heart trouble undermined his playing. Another generational trait was that he avoided the even numbered positions – although he used the second position in his Bach editions – and therefore slid more than modern players.

His portamento, a strength in Romantic music, came to be seen as a weakness in the Classical and Baroque fare he played so much.

Portamentos are another way of providing continuous variety and enhancing the melodic contour, and there are many opportunities for this as there are a lot of leaps and highly expressive melodies. But there have to be sound musical reasons for the slides. Take the phrase from bar 34 in which Schoenberg portrays the woman confessing ‘a tragedy to the man in a dramatic outburst’. In the Berlin recording that Schoenberg conducts, there are a lot of slides, which probably sound like overkill to the modern ear, but they definitely make the melody sound more volatile and dramatic.

The Hollywood Quartet recording is much more discreet with portamentos, and the shifting is lighter and integrated with vibrato, reflecting changes in taste through the intervening years.

I think that portamentos should be used to make the music sound more vocal and expressive, to heighten the melodic contour, and to vary repetitions of motifs so that they are subtly different. However, in the sections that reflect the moonlight, I think there should not be any portamentos at all, in order to give a much less personal sound and to provide a transparent texture.