Pierre Lapointe, violist of the Escher Quartet, examines some tricky corners encountered during the ensemble’s recent recording of works by Pierre Jalbert 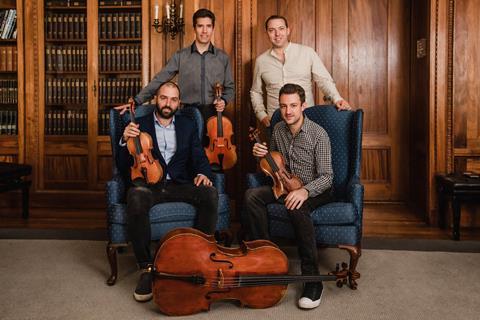 Since our inception in 2005, the Escher Quartet has had the immense privilege of working with several studio engineers that have produced great recordings for us. Generally, I always felt that recording a piece was less stressful than performing it live because, in the studio, you get more than one chance to lay down a difficult passage. Therefore, I was looking forward to this particular recording session of string quartets no. 4, 5 and 6 of Pierre Jalbert, alongside his flute quintet Air in Motion with Carol Wincenc, thinking that the recording process ought to be easy given how well we could all play the pieces together in rehearsal.

However, none of my previous sessions had prepared me adequately for the one at the Okataven with Pierre Jalbert himself in the booth, listening to every take. It is one thing to play a Jalbert String Quartet in concert, which does not lay too many difficulties if compared to Berg’s Lyric Suite or Bartók’s Fifth String Quartet, but an entirely different one to record it for posterity. All of a sudden, every little discrepancy from the score, which did not bother us too much in the concert hall, became magnified in the studio.

Because Jalbert’s music seems to musically depict geometrical figures at times (one can look at the titles of String Quartet no. 4 to verify my words), we felt compelled to be as accurate as possible. Needless to say that this recording session turned out to be more challenging than anticipated given the mechanical and relentless rhythm contained in most of the fast movements.

For instance, there is a fugato section in Movement 4: Spiral II of Quartet No. 4 which tested our inner pulse more than anything else. The cello starts pianissimo with 36 sixteenth (semiquaver) notes on the same low F-sharp, but with accents on different beats. Then the viola enters on a low D, following the same rhythmical contour displayed three bars earlier by the cello, but the displacement of accents between the two voices, combined with the soft prescribed dynamic, the sustained three-note chord in the violins and the absence of melodic profile was making the correct rendition of that passage extremely difficult. On the other hand, given the specific nature of that section, we could not settle for anything other than strict rhythmical accuracy. As a result, we tested the waters plenty of times with that one specific link and other similar ones in different pieces until the composer was thoroughly satisfied.

Another technique prescribed by Pierre that gave me problems was the fast legato trill encompassing a major third at the very outset of Quartet no. 4. There were a lot of them! The difficulty lies in obtaining a clean sound while trilling at the same time. Normally, a trill in classical repertoire consists of a minor second or a major second interval, which would be easier for me to achieve without affecting what I was doing with my bow. However, the cleanliness of that major third trill was way more difficult to get because the left hand fingers had to be pressed down on the string more than usual. I also needed to deploy a much slower bow speed, especially on my C string, to avoid that unwanted fuzzy and unclear sound that I was getting if not super careful with my two hands. Consequently, I felt that we also recorded that passage a lot of times in order to secure it to Pierre’s liking.

I also needed to deploy a much slower bow speed, especially on my C string, to avoid that unwanted fuzzy and unclear sound that I was getting

A further technique that gave me trouble involved a glass rod and my viola in the third movement of Quartet No. 6 ’Canticle’. I would strike quickly a glass rod on the E-flat in first position on the C string of my viola, where I would normally use one of my left hand fingers to press it down. What was heard was an  effect similar to what occurs in the section titled God-music in Black Angels by George Crumb, who was one of Pierre’s mentors. The challenge here resided in striking with a glass rod the same E-flat for seven measures where nothing else was going on, with the other three were lightly joining me for two bars out of my seven. Again, a machine-like sound was required, which meant we had to record many versions of that section to find the best fit. I am human all the way through!

In retrospect, the recording process of these three ingenious quartets written by Pierre Jalbert with the Air in Motion flute quintet became a taxing experience more than originally conceived. That being said, I thoroughly enjoyed the process, especially thanks to Pierre whose presence was immensely helpful. Having successfully wrestled the likes of Zemlinsky, Mendelssohn, Ives and now Jalbert in the studio with my three colleagues of the Escher Quartet, I am forthwith ready for the next recording session.

Air in Motion is out now on Orchid Classics

Read: How I write for strings - composer Danielle Eva Schwob

Read: ‘The violin has been the conduit that has expanded my thinking about music’: Michael Torke