‘The violin has been the conduit that has expanded my thinking about music’: Michael Torke

The composer writes about new creations, thanks to collaborations with classical and bluegrass violinist Tessa Lark 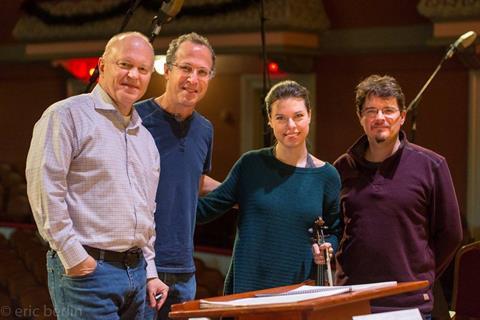 The violin is the most expressive and versatile instrument I know. Its range is spectacular: it can as easily take command as a soloist in front of an orchestra, as it can provide the thick homogenous warmth of a string section. It can handle any musical idea from tranquil drones to virulent attacks of the bow. Slow playing is as effective as fast playing, and nothing is as close to the human voice as its soaring melodic line. It is used effectively in all styles, from classical, jazz, pop, folk, to the fiddle playing of bluegrass and Irish music.

The violin has been the conduit that has expanded my thinking about music. It is through this instrument that I was able to clear the cobwebs of my imagination to burst forth new ways of imagining how notes of music could be put together. Two recent projects of mine, which happen to both involve the consummate virtuoso, Tessa Lark, illustrate how this happened.

Tessa’s dual upbringing of both classical and bluegrass has conditioned a highly creative strategy to career building: by involving herself with practitioners from all the styles, classical, bluegrass, jazz, and pop, means that she circulates among many musical worlds. She asked me to write a small piece for her Carnegie Hall recital in 2018, and I wrote Spoon Bread, whose programme note points to her Kentucky heritage. While the piece shared detaché bow strokes in common with bluegrass, it had little to do with that actual style, and I had to come to terms with the fact I fundamentally did NOT understand bluegrass.

What if through study and Tessa’s guidance, I learnt, and then wrote a new piece, incorporating my voice and my structures into this unfamiliar music? Tessa, in all her exuberant optimism agreed to help out, and the result was SKY (2019), a fully notated concerto that, while it develops ideas like banjo picking executed on the violin, or stomps notated in 5/4 time, in the end is not bluegrass music at all, and it never tries to abolish or replace the traditions of the classical violin concerto, Instead, it attempts to infuse a fresh view of an old form—so that something unique could be written, yet sharing in the tradition of a solo vehicle for a violin virtuoso.

In the more recent release TIME (2022), for 22 musicians, the inspiration came from another style of music I had never even heard of: a branch of house music, called Progressive House. This kind of music is made by machines: perfect beats put together by electronic sounds to create a blissed out high. Again, I studied this unfamiliar medium, and learned to write in it, using my own voice and structures. The conceit here was, why do these musical patterns have to be made by machines, when we have so many talented humans who can play? So, I turned all the drumbeats into pitched material and used only acoustic instruments. The result is an invigoration of music written for traditional acoustic instruments into something that stands apart from what you might expect these instruments to play.

Why do these musical patterns have to be made by machines, when we have so many talented humans who can play?

Tessa and I were talking, and I asked her if she might like to stop by the studio and lay down the two violin and viola tracks (she plays viola too! Who knew?) and to my utter astonishment and gratitude, Tessa said yes! Studio work comes easily for her (being an excellent reader and having a very aggressive approach to rhythmic material) and she said this would be a relaxing break from her other activities. With Paul Wiancko on cello, and Michael Thurber on bass, the five strings of TIME is a vivid plethora of rhythmic cells, beats and colour. You can hear their fresh approach to music making jump off the page, which adds such important vitality to the whole.

I’ve often thought the world needs no more music: enough great music has been written to last a lifetime. If a composer endeavours to write music that he believes goes beyond mere self-expression; music that could have the durability to transcend the age it was written—that audacious claim could only be made if it carved out a unique parcel of aesthetic real estate. Imitation of the old does not contribute anything to our cultural discourse. Creating something new is the challenge, and unfortunately modernism taught us that ’new’ meant the inscrutable, the un-understandable, at times the ugly, and the boring. To be genuinely new is to aspire to inject vigorous engagement with things we know but are put together in surprisingly or unexpected ways. Only then can we hope to find something lasting. And the violin was the roadmap to lead me to these new territories.