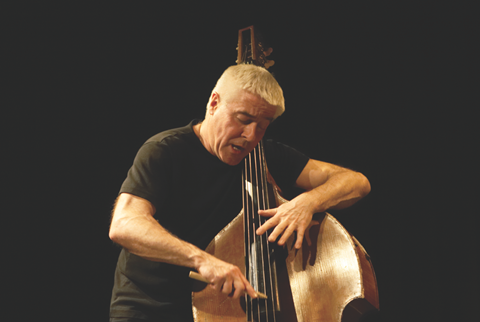 The composer Iannis Xenakis wrote one work for solo bass: the twelve-minute Theraps, in 1976. I discovered it just a couple of years later, when I was looking to expand my repertoire and thought it was perfect: it’s an intense work, one that demands you throw yourself into it wholeheartedly, as well as containing moments of great beauty and fragility.

At the time I was working on a programme of solo works – among them Jacob Druckman’s Valentine, which I was planning to perform in a red leotard, and Hubert Stuppner’s Rondo for a clown, which meant I had to run offstage and come back in a clown outfit.

When the score for Theraps arrived I thought it would be an excellent foil for the other two: it was music of great strength; the opening instruction is en écrasant (‘crushing the string’) and then the third bar goes from fff to pp, so it sets itself up as a piece of extremes right from the start.

There wasn’t much information in the score other than a note about the harmonics, and since I was in Paris at the time, I visited Iannis at his studio. I played the first page for him and when I’d finished there was a horrible silence. ‘Non, non, non,’ he said, ‘this is not how my piece should sound like!’

He’d written the piece for the bassist Fernando Grillo, who played with a special Italian technique – it involves creating pitches on a single string just by pulling the string aside, off the fingerboard. It dates from the time of the three-string basses used by Dragonetti and Bottesini, who used it to get really high notes at the end of their shortened fingerboards.

I, however, was playing more of a sinuous quartertone line with separate bows, which sounded like teatime music, rather than what he wanted: a series of pulsations, indenting a continuous glissando. I returned to England to work on the piece with renewed inspiration and enthusiasm.

The next time I saw Iannis was a year later in London. This time I wanted to ask him about the unusual double glissandos in contrary motion, which make up a large part of Theraps. I was finding them difficult, because when you have your arm wrapped round the bass, you somehow have to cross over your fingers – or have fingers two feet long – in order to play these glissandos.

I remember both Iannis and me contorted around the bass trying to work out the best way of playing them. We worked out that it’s easier if you look at it from the front rather than behind the bass: your fingers cross over in a crab-like way, then one finger goes up the string, passing by the thumb, then the thumb goes up the other string and so on.

Iannis told me that for this piece you have to exaggerate all the dynamics and tempos as much as you feel is appropriate to your performance. Even though he didn’t like improvisation as such, he wanted me to be free with expression in that way, which allowed me to play as if it were improvisatory in terms of the energy and commitment. It’s such an intense piece that I even found that my whole bodily frame would be in a state of shock by the end.

My right arm and left fingers would be shaking, so much that I had to work out a way of moving the body – and my psychological state – from energy to stasis, in order for the harmonics to float. The piece has an incredible core of energy, coupled with these moments of floating.

Later I got a letter from Iannis asking me to put together some performing notes about Theraps, along with my reactions to the piece. I did, and he liked it so much he used it in the preface to the modern score. He also sent a message: ‘I liked your performance: it has power, refinement and musicality, and it could be considered a kind of model.’ So I’m glad I finally worked out the way to play it to his satisfaction.