The Australian violinist on Crowded House, ‘classical’ music and the importance of the Antipodean perspective 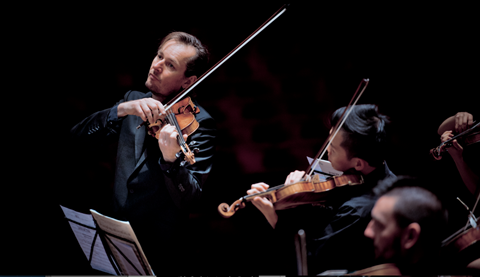 I grew up in Wollongong, a tough old industrial town about 60 miles south of Sydney. It wasn’t really the kind of place where kids grew up playing the violin and I wished back then that I could meet more people who did. That said, the place also happened to be home to violinists Harold and Nada Brissenden who were responsible for bringing the Suzuki method to Australia. Hiroko Sawa, another Suzuki disciple, followed them to Wollongong and she also brought her husband – the Scottish violist William Primrose.

I studied with Hiroko, and later with Alice Waten, but for a few years from when I was about nine I also had lessons with William. I was no prodigy but he was lonely in Australia and I think he enjoyed having someone to whom he could tell his anecdotes and gossip, about none other than Heifetz, Piatigorsky, Beecham and Toscanini.

I was in awe, and no doubt if I’d been four or five years older I’d have been a more pro-active student. But perhaps it was a blessing that I was so young – you absorb things differently at that age, as your brain filter isn’t so engaged. Looking back, I realise I imbibed that time with Primrose into my musical DNA, but although he never said as much, I think that he probably found his autumnal ‘Wollongong period’ mightily frustrating.

The word ‘classical’ does a disservice to the music we play. What does it even mean? It isn’t restricted to music written in the Classical era, nor does it just denote that which is ‘classic’. It is, I suspect, meant to signify that we’re accessing a ‘holy musical canon’. Sometimes we are but so often we’re not.

As a kid I listened to lots of different kinds of music and was always itching to know what musicians from the other side of the tracks were up to. Meat Loaf and Kiss had currency back then – they were the sounds of Wollongong when I was a neophyte pop listener. Then, on my first day of high school, I was handed a cassette – oh, for that slow dissemination of musical tastes – of Jimi Hendrix, who was consistently mind-blowing, and Yes, who were impressive, tacky and occasionally awesome.

It was in the 90s, though, that I got myself an electric violin and really started exploring. In 2001, I had the honour of playing with the band Crowded House, and it was with them that I got an inside view of the skills required to produce sounds in a group like that. I was struck by the similarities with chamber music in the way each person had to play off the others while still constructing their own sound.

The difference was the audience, of course. They were electrifying, and in the Australian Chamber Orchestra we try to create that kind of ambience. You can’t demand silent concentration; you have to command it. If the audience cough nervously or twitch en masse, I have to take responsibility.