Autumn 2020 was scheduled to be a big one for violinist and conductor Nikolaj Szeps-Znaider, with the start of his first music directorship in France and his conducting debut at the Royal Danish Opera. Here he tells Andrew Mellow about the experience of conducting in the face of social distancing restrictions 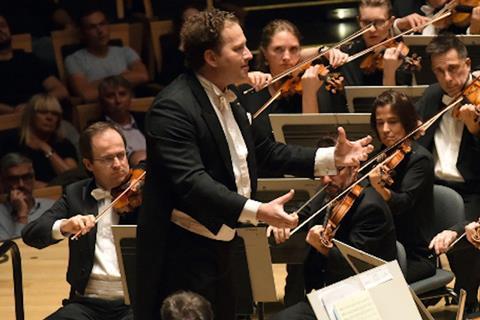 The following is an extract from an article in The Strad’s February issue in which Nikolaj Szeps-Znaider talks about his parallel careers as a violinist and conductor. To read in full, click here to subscribe and login. The February 2021 digital magazine and print edition are on sale now.

Nikolaj Szeps-Znaider’s professional experience as a conductor stretches back a decade and a half and includes the role of principal guest conductor of the Mariinsky Orchestra in St Petersburg. Lots of ‘perfect chemistry’ and ‘love at first rehearsal’ clichés surround the appointment of a new conductor, and his arrival in Lyon has been no exception. So what’s the reality, in the rehearsal room? ‘Like everything, it’s always easy in the beginning!’ he says with a wry smile. ‘We are still in the process of really getting to know each other. That’s why being a music director is interesting: there’s nothing you can implement over a week or two months; it’s about finding a way of thinking, an approach to music making, over a number of years. Things have not been made easy by the restrictions we are facing now. If you had told me a year ago that I would have to conduct an orchestra sitting in the way the orchestra is sitting, or with the reduced rehearsal time we are subjected to, I would have dismissed it as impossible. Of course, it is possible even if it’s not ideal. This whole thing has reminded us of what’s important: having the chance to make music.’

He refers to each week in the immediate future as having ‘a plan A, a plan B, a plan C, a plan A minus and a plan B plus’. But despite that, there have been advantages to the many adversities visited upon the world of orchestral performance. ‘Not that this whole thing hasn’t been a disaster for everybody, but we have seen how exible and creative we actually can be, and as a result all kinds of things have popped up,’ Szeps-Znaider says. Can he envisage the orchestral world’s long planning-window shortening? ‘I hope so, because yes, it is absurd: how do I know what I want to play or conduct in three years? I have no idea. If that goes, it will not be such a terrible thing.’