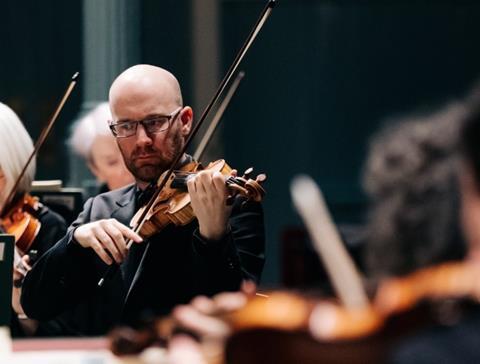 In the long silence of the spring lockdown I found myself drawn more and more to meditation; the simple act of sitting and observing the random thoughts which came into my head. Sometimes as performers, the natural thing to do with these thoughts is to suppress them when we are making music but while playing Samuel Barber’s String Quartet op.11 for the first time with my wonderful colleagues Stephanie Gonley, Felix Tanner and Eric de Wit from the Scottish Chamber Orchestra, I decided to observe my initial, slightly disparate, impressions of the piece in rehearsal and write them down:

The form of the whole piece is unusual

The form that Barber settled on (after an aborted version of the third and final movement) is highly unusual in that the last movement is a reprise of the beginning: Barber took material from the original coda of the first movement for the work’s conclusion and wrote a new first movement coda instead. It could be argued that rather than containing three movements, the piece feels more like one movement interrupted by the transcendence of the Adagio. It would be fun to curate a concert where we apply this form to famous works. Imagine the Bruch and Mendelssohn Violin Concertos, for instance, where we just ‘misplace’ the second movement into the middle of the first and dispense with the last movement? OK, perhaps not.

I don’t know much about Barber’s character but on first glance it would seem that he was anxious as a young composer - too anxious?- to write down the exact soundworld that he wants. In the first rehearsal, for instance, I found myself exaggerating a tranquillo marking and then saying rather ruefully ’I would have played tranquillo anyway!’ Perhaps a better explanation is that Barber wrote this in 1936, a time where players were more inclined to play ‘music’ and be less hypersensitive to observing the ‘directions’ - rather than the opposite danger that I sometimes fall into of being hypersensitive to playing the ‘directions’ without observing the ‘music’. Big difference.

For me there is a ‘Rosetta Stone’ of a bar in the second movement, the famous Adagio, where the second violinist has to helplessly imagine playing a B flat and D flat on the G string as a double stop. There are also certain hand positions in the cello part which are deeply uncomfortable. This bar seems to be proof that Barber knew immediately that larger forces should play it although the archaic sonority of the double-stops is markedly different from the rich bed of sound we normally associate with the version for string orchestra. I also love the ridiculously romantic notion that Barber, like Beethoven, was moved by ‘the spirit’ and that our ‘wretched’ instruments are subservient to this inspiration.

Part of my practice routine religiously involves left-hand finger exercises by the Greek pedagogue Demetrius Constantine Dounis. Designed to give independence of movement to the four fingers, these warm-ups are so far removed from ‘real’ music that they can seem like a digital Sudoku puzzle to be executed while doing something else, like watching television. Well, the years of practice have led to one bar of Barber’s Adagio! In the second violin part, 13 bars from the end, I need to plant my second finger halfway across G and D strings, while third and fourth fingers are called into action. I then need to delicately ‘half-lift’ the second finger over to the G string because I need to play the B flat with the first finger E flat on the D string. All these finger brain-teasers should be done with a solemnity and gravitas that the piece naturally demands.

This is an extraordinary piece of music

Somehow when discovering a new piece in rehearsal every sense is heightened, and you learn in time to look out for important waymarkers, much in the same way as a group of explorers navigates terrain. You learn to apply different levels of magnification to a work when doing this exploring: sometimes concentrating on one chord to check intonation or a sonority, right up to running movements through to grasp the larger architecture of the piece. Only when I have applied these different levels of magnification can I feel that I have started to truly discover a work’s treasures. After working on this piece and recording it there is the wonderful/daunting feeling that I have just scratched the surface. Apart from the emotionally overwhelming Adagio my favourite part is the ending: frenetic arabesques give way to an anguished cry of G sharp minor before a breathless stringendo sino alla fine charges to the end in the key of B minor. The drama of this piece is so powerfully concise.

The Scottish Chamber Orchestra will stream free performances of Barber’s String Quartet op.11, alongside Bernstein’s Clarinet Sonata and Coleridge-Taylor’s Nonet, filmed in The Queen’s Hall, Edinburgh, on Thursday 22 October at 7.30pm on its Facebook and YouTube channels. For full detail’s of this season’s streamed events visit www.sco.org.uk.