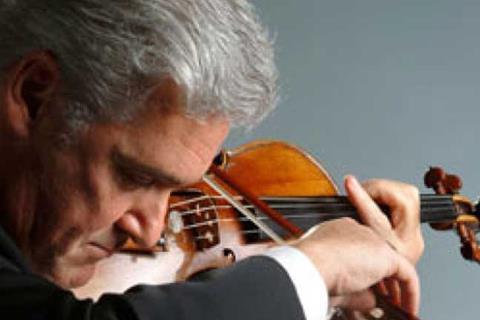 Performing on both violin and viola, Pinchas Zukerman was part of a circle of prodigious young musicians including Daniel Barenboim, Zubin Mehta, Itzhak Perlman and Jacqueline du Pré. Born in Israel in 1948 to parents who had moved to Tel Aviv from Poland after surviving concentration camps, Zukerman's early musical development was greatly influenced by his father, a klezmer violinist. From the age of eight, Pinchas studied with the renowned Hungarian violinist Ilona Feher, who, like Zukerman's parents, had arrived in Israel after the war. Under her tutelage, his status as a prodigy progressed at an impressive rate until Isaac Stern and Pablo Casals heard him play in 1961. The two virtuosos recommended that he should study at the Juilliard School in New York where he became a student of Ivan Galamian. His breakthrough came when he won joint first prize (shared with Kyung-Wha Chung) at the Leventritt Memorial Competition in 1967, a success that sparked his career as a major international soloist, which began with his New York debut at the Lincoln Center in 1969. Embracing the versatility provided by his proficiency on both violin and viola, Zukerman's repertoire ranges from the Baroque era to new works by Lutoslawski and others. In 1980, he was named music director of the Saint Paul Orchestra before accepting the musical directorship of Canada's National Arts Centre Orchestra in Ottawa in 1998. Zukerman plays a 1742 Guarneri 'del Gesù' violin.