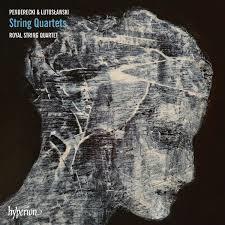 Formed in Warsaw in 1998, the Royal Quartet has already garnered high praise for its recordings of Szymanowski and Górecki (reviewed in February 2009 and May 2011 respectively). And this thrilling new disc doesn’t disappoint – the strange, effects-laden sound worlds that Penderecki and Lutoslawski conjure in their quartets are the ideal match for the Royal foursome’s astonishing knack for vivid texture and colour. There’s a sheen to the players’ sound, but it does nothing to detract from the raw drama of their playing.

The two-movement Lutoslawski Quartet is the meatiest work on the disc, and the Royal players trace its ever-changing textures with startling confidence, all four of them emerging as vociferous soloists at different points – cellist Michal Pepol has a scorchingly intense multi-stopped passage near the end of the first movement.

It’s hard to believe that the three Penderecki quartets were all written by the same composer – the plangent, neo-Romantic sound world of the Third (2008) is an abrupt volte-face after the weird sonic experiments of the First (1960) and Second (1968). But without disregarding any of the composer’s radicalism, the Royal players find potent meaning in the earlier works’ sometimes outlandish noises, and point up similarities with the Third’s brutally passionate eruptions. With its warm, generous sound, and its performances of emotional depth and searing intensity, this is an extremely fine disc.