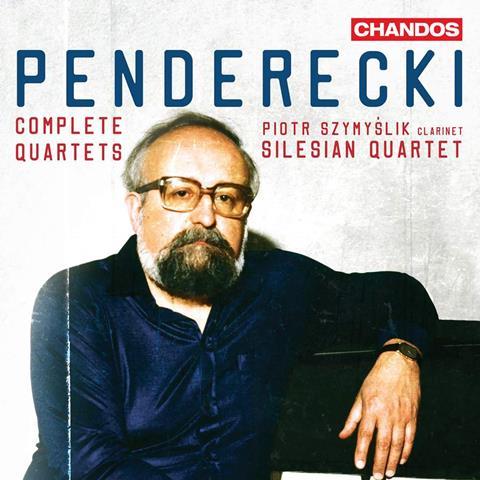 Penderecki was that rare composer whose trajectory seemed to go backwards: starting out as an uncompromising modernist he eventually took on a more conservative style until by the end of his life he could almost be described as a neo-Romantic. This pattern is laid bare in his cycle of string quartets, comprising four numbered works and a separate miniature that between them amount to a mere 40 minutes of music. Where the Tippett Quartet on its recent Naxos cycle (reviewed August 2021) filled out its programme with the String Trio, the Silesian Quartet has instead gone for his remaining quartet, a more ‘classical’ work for clarinet and strings (1993).

The Silesians similarly take a chronological approach, which lays bare that retrogressive journey. Their playing is gripping in the two seven-minute modernist works, nos.1 (1960) and 2 (1968), with all the composer’s experimental additions – percussive and vocal as well as string-based – welded seamlessly into the whole. The music may mellow in the later works, as we end up in a sparer, more meditative world akin to late Shostakovich, but the players here bring intense concentration and emotional commitment alongside their technical prowess. With vivid, forward recordings in the best Chandos style, this is a worthy successor to the Silesian Quartet’s revelatory Bacewicz recordings on the same label.