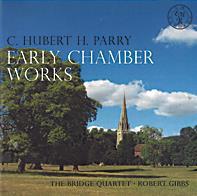 Parry produced his Third String Quartet in 1878. It was performed two years later and eventually disappeared, to be found in the papers of Gerald Finzi in 1992. This is the first recording. It’s a substantial four-movement work, full of busy, egalitarian writing, which receives an admirably clear performance from the Bridge Quartet.

There is impetus in the attractive, discursive first movement, and a gentle, urbane flow to the Andante that follows, with the viola bubbling gently beneath and the second violin providing eloquent countersubjects to the first-violin melody. The viola has the limelight at the opening of the ominous third movement (violist Michael Schofield earns his corn on this CD), described by Parry as a ‘death’s head scherzo’. The amiable finale, with its constant passing and dovetailing of material, is deftly handled.

The Quintet, written a few years later, also receives its recorded premiere here. This work inhabits a darker, more unsettled realm, and is played with fluency and a sense of passion held in check. The players bring a jaunty swagger to the urgent second-movement Allegro molto, and the following Andante is full of detail and shifting sonorities, rich and spacious. The recording is close-in.