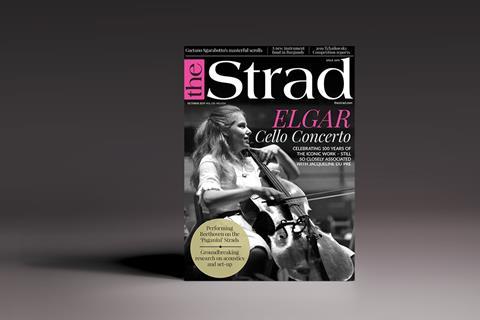 To mark a centenary is to celebrate the very great and enduring impact of a person, event or artwork. Elgar’s Cello Concerto falls into this category to such a degree that it may seem surprising that the composition is a mere 100 years old. So profound has been the work’s impression on the world of classical music that it is difficult to imagine a time when it did not exist.

Yet when Felix Salmond premiered the concerto with the London Symphony Orchestra under the composer’s baton in 1919, the verdict was mixed. It remains a matter of debate as to how underprepared the orchestra really was, but it is nevertheless the case that some years passed before the work was roundly embraced by the musical community – and it was not until Jacqueline du Pré’s landmark recording of 1965 that the concerto achieved the prominence it enjoys today. On page 30 cellist Raphael Wallfisch details the work’s conception, premiere and subsequent interpretations, while on page 37 Tully Potter explores the lasting popularity of du Pré’s powerful performance.

Of course, when recording the concerto under John Barbirolli, du Pré was helped in no small part by a magnificent instrument – the ‘Davidov’ Stradivari of 1712, which she had obtained only a few months beforehand. This issue pays tribute to several other great instruments – not least the maker’s ‘Paganini’ quartet, on which the Kuss Quartet recently performed a complete Beethoven cycle in Tokyo. On page 38 Gavin Dixon speaks to the musicians about playing on the famous set, once owned by Nicolò Paganini and now on loan for individual projects by the Nippon Music Foundation. Then, on page 46, Andrea Zanrè examines the scrolls of late 19th- and early 20th-century luthier Gaetano Sgarabotto – a highly skilled copyist of the old Italians, and a masterful maker in his own right.