Son of the renowned musician David Oistrakh, the violinist and educator lived to the age of 90 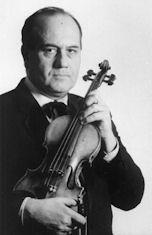 Violinist Igor Oistrakh has died at the age of 90. He was born in 1931 in Odessa, Ukraine, the son of Tamara Rotareva and acclaimed violinist David Oistrakh.

After initial musical studies with his father, Oistrakh studied at the Central Music School in Moscow, followed by tuition at the Moscow State Tchaikovsky Conservatory. He won the Budapest International Violin Competition in 1949, as well as the Henryk Wieniawski Violin Competition in Poland in 1952.

As well as an international solo career, Oistrakh was a dedicated teacher, joining the faculty of the Moscow State Tchaikovsky Conservatory in 1958. Since 1996, he was a violin professor at the Royal Conservatory in Brussels. He retained a wealth of awards and appointments throughout his career, including Fellow of the Royal College of Music, London, Presidency of the Russian section of the European String Teachers Association, honorary member of the Beethoven Society in Bonn and the Jascha Heifetz Society, as well as having the unique honour of having an asteroid named after him and his father - the 42516 Oistrach.

With his pianist wife Natalia Zertsalova, he recorded many staples of violin repertoire, including the complete Mozart and Beethoven violin sonatas, as well as works by Bach, Paganini and Prokofiev. Their son Valery continues the family line of violin playing and is also a violin professor at the Royal Conservatory in Brussels.