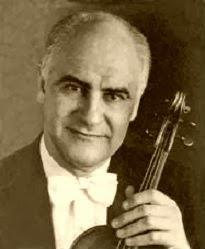 Rubén D’Artagnan González, who has died aged 79, was a distinguished Argentinian–American violinist, conductor and composer. He served as co-concertmaster of the Chicago Symphony Orchestra for ten years, from 1986 to 1996, and was also a leading violin pedagogue.

Born in Viale, Argentina, in 1939, González began learning the violin aged five. He was taught by Osvaldo Pessina in Buenos Aires, before studying in France with Salomon Baron, disciple of George Enescu, and with Riccardo Brengola in Italy. In 1964 he took the first prize at a violin competition in Barcelona, and later the silver medal at the Concours de Genève. In Italy he received the Diploma of Honour at Siena’s Chigiana Academy and went on to perform with I Virtuosi di Roma. He returned to Argentina, where in 1971 he became music director of the Camerata Bariloche chamber group, succeeding Alberto Lysy. He then moved to Germany where he was appointed concertmaster of the North German Radio Orchestra in Hamburg. He moved to the Minnesota Orchestra as associate concertmaster in 1977, and to Texas in 1981 where he became concertmaster of the Houston Symphony and took a teaching position at Rice University. In 1986 Georg Solti named him co-concertmaster of the Chicago Symphony with Samuel Magad. González resigned ten years later, to focus on his work as a conductor and composer.

González also taught at the University of Minnesota’s Congress of Strings, and the Bariloche Foundation in Argentina. As a composer, he saw his work Ballet Venus performed in Osaka, Japan, in 1997, and his symphony Dionisias and the Lone Wolf, co-written with Mariano Krauz, premiered in 1994.