The Strad November 2019 issue is out now 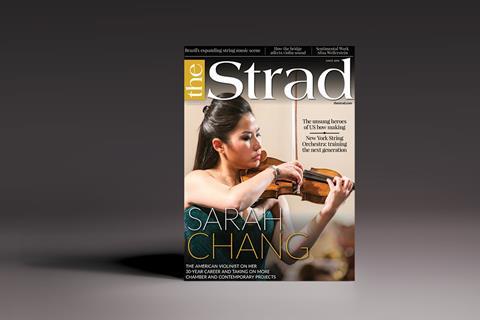 Sarah Chang talks about how her passion for chamber playing, and the collaborative process of premiering a new concerto by Hollywood composer Fil Eisler, are helping her to reassess the central violin canon with which she made her name.

For five decades, the New York String Orchestra Seminar orchestral training programme has given young players professional experience in the company of star soloists. Our Strad correspondent reports from the rehearsal hall ahead of the ensemble’s December 2019 edition.

We hear about the lives and achievements of three outstanding American bow makers of the early 20th century, Kovanda, Lohberg and Halvarson, who all trained at William Lewis & Son in Chicago. Meanwhile, the second of a two-part examination of set-up looks at the acoustic properties of bridges from the Baroque era to the present day.

As a new anthology on the music of Brazil is released on Naxos, our Strad writer discovers the variety and vitality of string and orchestral writing from South America’s largest nation

In Focus spotlights a 1929 violin by Paolo Guadagnini; Antoine Nédélec has a method for uniting arching, channelling and edgework in Trade Secrets; My Space looks inside the Buenos Aires workshop of luthier Lionnel Genovart; and in Making Matters Joseph Campanella Cleary considers the many uses of the humble wedge in stringed instrument making.

ALL WEBLINKS ARE NOW CLICKABLE, INCLUDING THE ADS

The digital magazine and print edition are on sale now, or subscribe to access the entire magazine online here