The second prize winners receive €5,000 each 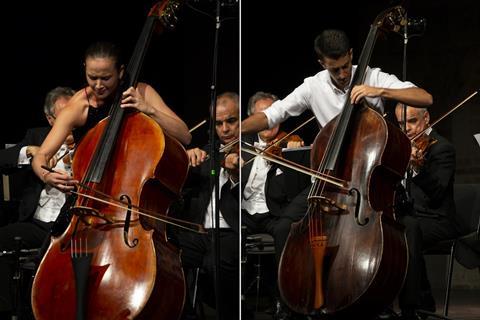 From left to right: Maria Krykov and José Trigo

After a week of music-making featuring nearly 60 young double bass players, the Bottesini Competition in Crema, Italy, has awarded its second ex-equo prize jointly to the 27-year-old Finnish bassist Maria Krykov and the 22-year-old Portuguese bassist José Trigo. They receive €5,000 each as well as bows made by Emilio and Luca Slaviero and Marco Pasquino.

Krykov, who is studying at the ‘Hanns Eisler’ school of music in Berlin with Matthew McDonald, has performed as a soloist with ensembles including the Munich Chamber Orchestra, Baden- Baden Philharmonic Orchestra, Trier Philharmonisches Orchester and Orchestra Celestino.

Trigo, who studied with Petru Iuga at the State University of Music and the Performing Arts in Mannheim, has been a member of the Bavarian Radio Symphony Orchestra since April 2019.

No first prize was awarded.

Founded in 1989 on the initiative of Master Franco Petracchi, the competition is named for the great Crema double bassist Giovanni Bottesini, and ranks amongst the most prestigous events devoted to the instrument.