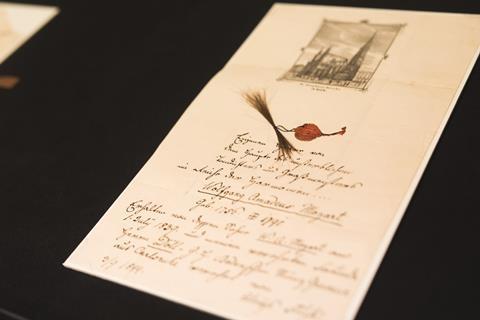 A lock of Mozart’s hair attached to a letter written by the composer on 4 November 1777.

The items have been donated to the Foundation by the descendants of one Carl Wilhelm Doell, who engraved coins and medals in the German city of Karlsruhe. Doell designed a silver medal in honour of the composer in 1843 and arranged for Mozart’s son, Franz Xaver Wolfgang, to receive a copy of it as a present. Franz Xaver’s letter of thanks is among the collection.

The Foundation describes the cache of four pieces as important evidence relating to the life of the composer: ‘All have been in the same family’s possession since the middle of the 19th century. These priceless acquisitions bring together three generations of the Mozart family: Mozart’s parents, Leopold and Anna Maria; Wolfgang Amadé himself; and his son Franz Xaver Wolfgang Mozart.’

While the lock of hair is the most eye-catching relic among the items, the most significant piece is a previously missing page from a letter that Mozart and his mother Anna Maria wrote to Leopold in Salzburg on 4 November 1777, when mother and son were staying in Mannheim. The first four pages of this letter have been a part of the Mozarteum Foundation’s holdings since 1844, when they were added to the collection with numerous other letters and music autographs by Mozart that had been received from the estate of the composer’s youngest son, Franz Xaver Wolfgang, following his death in Carlsbad on 29 July 1844.

‘Even at that early date the final page of the letter was missing,’ the press statement reads. ‘The final section of the letter had been folded and used as a cover for the remaining pages, with the address of the recipient on the back. This part of the letter is interesting for two reasons. First, the opening section was written by Mozart’s mother, who added a brief postscript to her son’s letter, passing on the best wishes of a fellow musician, Giovanni Battista Gervasio (1725–1785), and noting that Gervasio and his wife wished to congratulate Leopold on his “virtuoso son”.

‘This newly acquired section of Mozart’s letter was previously owned by Carl Wilhelm Doell (1787– 1848), who worked for the grand duke of Baden in Karlsruhe, engraving coins and medals. A great admirer of Mozart, he designed a silver medal in honour of the composer in 1843 and arranged for the latter’s son, Franz Xaver Wolfgang, to receive a copy of it as a present. Franz Xaver wrote to Doell on 3 September 1843 to thank him. This letter, too, has been acquired by the Mozarteum Foundation. Franz Xaver writes: “On the basis of my own experience I cannot unfortunately judge how good the likeness is since I was not yet five months old when my father died but existing copperplate engravings make me think that you have captured it very well.” 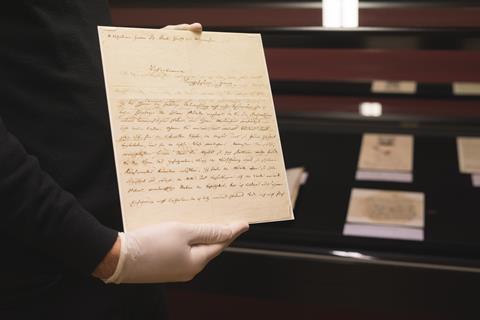 Mozart’s youngest son, Franz Xaver Wolfgang, thanks Doell for sending him a medallion featuring a depiction of his father, adding: ’On the basis of my own experience I cannot unfortunately judge how good the likeness is since I was not yet five months old when my father died but existing copperplate engravings make me think that you have captured it very well.’

‘The following year Doell travelled to Vienna to see Franz Xaver Mozart, but by then the latter was already dead. Doell was in contact with Franz Xaver’s friend Aloys Fuchs, who had helped Mozart’s son to organise the numerous original documents that he had inherited from his father Wolfgang Amadé and who in return had received a number of items from the collection. Fuchs was well known as a collector of autographs, and it was from him that Doell acquired not only the letter described above but also two other important documents.

‘The first of these is a previously unknown copy of the testimonial that the famous music theorist Giovanni Battista Martini (1706–84) provided for Mozart in Bologna. The copy was prepared by Leopold. The original dates from 12 October 1770 and attests that the then fourteen-year-old Mozart had exceptional abilities not only as a composer but also as a performer on the clavier and on the violin as well as being a fine singer and skilled in the art of improvisation.’

The lock of hair in the collection was passed to Fuchs from Franz Xaver Mozart, which he described as ‘actual hair from the head of the immortal composer and grand master in the realm of harmony … Wolfgang Amadeus Mozart.’ Several such locks of hair exist – the Mozarteum Foundation already owns five. The Foundation believes evidence that the lock is genuine is strong: ‘because, as Fuchs confirmed, he received it personally from Franz Xaver Mozart in 1839.’

The collection is now available to researchers and interested parties, all of whom have a chance to see the originals of these priceless items on exclusive tours of the Foundation’s Autograph Vault. The general public will be able to see them during the 2020 Mozart Week Festival. Digitized copies will be made available free of charge as part of our Bibliotheca Mozartiana digital. A printed facsimile is currently in preparation.