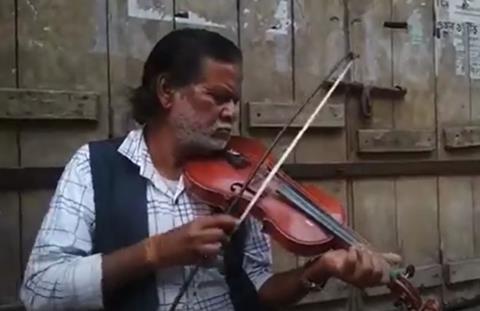 A street musician in Kolkata who has enjoyed recent viral success has received a brand new instrument from the police department.

Bhangaban Mali’s violin playing amongst various streets of Kolkata has been captured on video, enjoying thousands of views and shares on social media.  Mali has received warm reception from passers-by with viewers praising his ’Absolute mastery over bowing and playing notes in harmony’. Social media users began to drum up support for the musician to help Mali financially.

On 28 June, Kolkata Police announced on Twitter that they had donated a brand new violin to Mali:

Meet Mr. Bhagwan Mali, who is a very talented musician.Few weeks ago, a video of him playing his violin in the city streets, had gone viral on Social Media.Last week, he was financially assisted by our Community Policing Wing. Today, @CPkolkata gifted him a new violin. pic.twitter.com/750lYhZX0x

Watch Mali perform on the streets of Kolkata here: