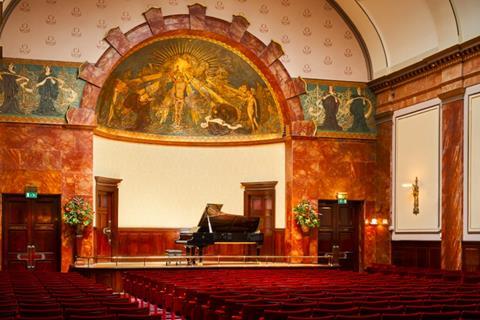 Alan Davey, Controller of BBC Radio 3 and John Gilhooly, Director of Wigmore Hall, today confirmed the first live classical music broadcasts on BBC Radio 3 from Wigmore Hall, following the nationwide lockdown. The two organisations, which usually partner for Wigmore Hall Lunchtime Concerts, have put together a series of 20 concerts, taking place at 1PM every weekday throughout the month of June, starting on 1 June.

The series marks Wigmore Hall’s temporary re-opening and BBC Radio 3’s resumption of live concert broadcasting as part of Culture in Quarantine, a BBC initiative to ensure culture remains in the homes of the public despite lockdown.

The series, made up exclusively of solo recitals and duos, will see some of the world’s leading musicians returning to a concert hall for the first time since the lockdown. They will perform to an empty Wigmore Hall with no audience present, with a minimal set up involving one BBC Radio 3 producer backstage, a BBC sound engineer, one presenter inside the auditorium and one member of Wigmore Hall staff on duty - in strict compliance with the government’s social distancing guidelines and with more than 2 metres in social distancing.

Every concert, approximately one hour in length, will be broadcast live on BBC Radio 3 from 1pm and on BBC Sounds, and will be streamed live on HD video on Wigmore Hall’s website.

Alan Davey, Controller BBC Radio 3 and classical music commented: ‘Live music is in the DNA of Radio 3 and so its loss is felt by all, not just at home but also in the music industry. It is therefore a great joy to restore this service to the nation whilst also ensuring maximum health and safety. My thanks to Wigmore Hall for once again collaborating with us on the venture and also to the performers for helping us to bring live classical music back into the nation’s homes during quarantine.’

John Gilhooly, Director of Wigmore Hall said: ‘The health and safety of our staff and the musicians will always be Wigmore Hall’s foremost concern. This is a London-centric series. Most of the artists are based in London and have pledged to come in on foot or by bike. No artists will be taking public transport. I am very grateful to BBC Radio 3 and every musician taking part in these concerts, under the safest possible conditions. Through this series we bring great live music from our acclaimed acoustic to every corner of the nation and overseas.’

The series opens on 1 June with a piano recital by Stephen Hough. The musicians scheduled to perform are:

Detailed programme and schedule will be announced in due course.

The pianist Mitsuko Uchida who is performing Schubert’s song cycle Winterreise with the tenor Mark Padmore, said, ‘Only live performance brings danger and truth of the moment. Making music with Mark is bliss. Long live Wigmore Hall and Radio 3!’

The baritone Roderick Williams, said, ‘Nothing beats the live experience. Classical music is all about the present, about live, acoustic instruments, about reinventing and interpreting great art in the moment, different every time as circumstances dictate. I’m so grateful to have recordings but it is the live experience, the living relationship between performer, the music and the audience that really counts.’