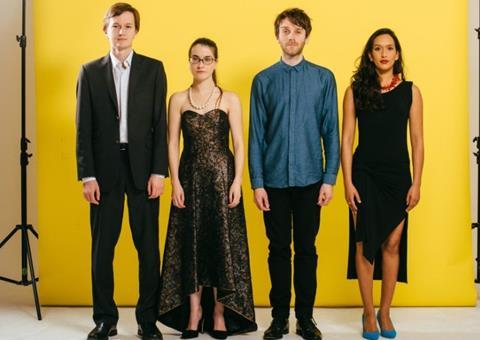 London-based ensemble the Ligeti Quartet are raising money for the UK homeless charity Crisis this holiday season with the release of a new CD of arrangements of traditional festive tunes.

Solstice Songs, by UK composer Tom Green, comprises five reimagined Christmas carols, including Silent Mirror, after Silent Night, The First Nowell, and Lulley Lullay, an arrangement of the Coventry carol. The collection was written for the quartet in 2019.

Ligeti violist Richard Jones said: ‘Tom Green, an old friend of the quartet, hatched the idea of creating some festive music which would be a break from the familiar relentless Christmas muzak soundtrack. We recorded Solstice Songs on a hot day in August. A few years ago we performed with Streetwise Opera, a charity that stages productions devised and performed by people who have experienced homelessness, and professional musicians. The charity Crisis was central to that project, and we were made aware of the brilliant work they are doing. So we are delighted to be able to support them with this release.’

Tom Green said: ‘I love Christmas carols, but we hear them in the same arrangements every year. Like any other folk song, they live through their retellings, so this is my attempt to lever open one of the rustiest boxes in popular music and look at the contents inside with new eyes.’

The Ligeti players - first and second violinists Mandhira de Saram and Patrick Dawkins, violist Richard Jones and cellist Val Welbanks - formed in 2010 and have dedicated themselves to exploring modern and contemporary music. They have previously commissioned new works from composers including Anna Meredith, Stef Conner, Elliot Galvin, Laura Jurd, Meilyr Jones and Submotion Orchestra. They are currently working on a long-term project with Ernst von Siemens prize-winning composer Christian Mason to create a series of Songbooks for string quartet, based on overtone singing traditions from around the world.

Tom Green previously wrote Gravity Fragments and Category Errors for the Ligeti Quartet, and has also written a chamber opera with the British poet Carol Ann Duffy, using her book The World’s Wife, scored for soprano and string quartet.

Solstice Songs costs £10 including postage and packing, and £5 of every disc sold will go to Crisis (www.crisis.org.uk). Visit shop.ligetiquartet.com.