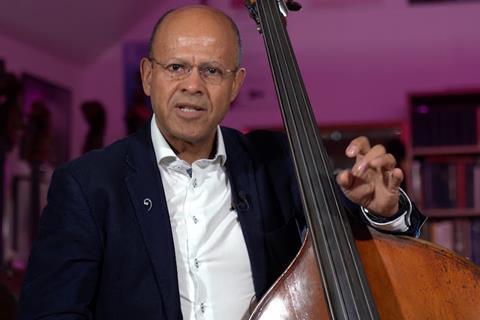 The double bassist Leon Bosch has been awarded a Fellowship from his former alma mater, The Royal Northern College of Music.

Leon Bosch left South Africa, where he grew up in  the 60s and 70s, to escape the apartheid regime, having himself been imprisoned for organising  political protests, and came to the UK to study at the Royal Northern College of Music. Now a British citizen, he was soon appointed principle double bass with the Academy of St Martin in the Fields under their founder Sir Neville Marriner, a position he only gave up after nearly 20 years, in order to devote more time to his solo career.

Since then, he has recorded works for the instrument by composers such as Koussevitzky, Kodály and Hindemith as well as promoting British composers such Gordon Jacob, Lennox Berkeley and Elizabeth Lutyens. But today he is devoted to expanding the repertoire for the double bass by commissioning new works, and both his latest CD ‘21st Century Double Bass’ and his concerts have featured works by composers including Roxanna Panufnik, Simon Parkin, Philip Wood and Malcolm Lipkin.

He also performs with his ensemble, I Musicanti, which is known for the distinctive nature of their programmes; and has conducted various orchestras.  In addition he is Professor of the double bass at Trinity Laban Conservatoire and gives masterclasses all over the world.

The double bassist will receive his award from President Sir John Thomlinson at the RNCM on 10th December.