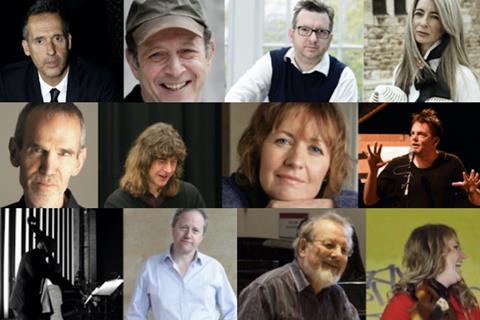 All of the composers have waived their fees, and Sound World is running the project on an entirely voluntary basis.

With the help of some of the world’s leading composers, Sound World, the Bristol charity supported by Dame Evelyn Glennie and Armando Iannucci, is supporting freelance musicians who have been hit hard by the lockdown.

Devised by Julian Leeks (Bristol-based composer and Sound World director), the project involves composers writing new music in support of their performing colleagues. The pieces are recorded at home, in lockdown, before the individual parts are edited and mixed for online release. The performer fees are being funded entirely by public donations raised via a crowd funding campaign in support of the project at https://www.crowdfunder.co.uk/musicians- coronavirus-fund.

The composers include Steve Reich, Dame Evelyn Glennie, Nico Muhly, Graham Fitkin, Sadie Harrison, Gavin Bryars, Mark-Anthony Turnage, Michael Ellison, John Pickard, Geoff Poole, Howard Skempton and Sally Beamish - who is writing a tribute to Ellis Marsalis, who died in April of Covid-19. All of them have waived their fees, and Sound World is running the project on an entirely voluntary basis. Several of the offerings include parts for string instruments, including those by Fitkin, Bryars, Turnage and Harrison.

Leeks explains, ‘This is a tough time for freelancers and these are people who, through their talent and generosity of spirit, have contributed a great deal to what we do. Most are regulars with the Bristol Ensemble and play a huge part in the region’s musical life. So it seemed natural that we should try to support them. “The project creates proper, paid recording work funded by public donations, and it gets the musicians doing what they do best - making great music. It’s also an opportunity for our best local musicians to work with some of the world’s best composers. It will help financially, but I hope it will also make the lockdown a bit easier to get through.’

Reich describes the project as, ‘humane and much needed’, while Dame Evelyn says, ‘As a Patron and supporter of the valuable work of Sound World, I am delighted to be participating in their project by writing a short piece called ‘The Grace of Silence’ for Vibraphone & Piano. The US composer Nico Muhly, in a personal video message, spoke about the ‘excellent musicians’ of the Bristol Ensemble and urged people to support this ‘great project’.

The pieces will initially be available as pre-release downloads, from the crowdfunding page. After the campaign expires, an album containing all the pieces will be officially released for download/streaming.