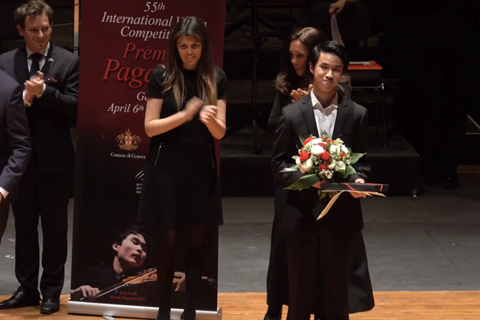 Kevin Zhu has been crowned the winner of the 55th edition of the Paganini International Violin Competition in Genoa. The 17-year-old American will take home a €20,000 cash prize as well as an invitation to perform a recital on Paganini’s favourite violin, the 1743 ‘Cannon’ Guarneri ‘del Gesù’.

Zhu also won special prizes for his Paganini Caprice performance, and for being the youngest finalist. He is no stranger to the competition circuit, having previously won the 2012 junior category of the Menuhin Competition.

The other finalists in ranking order are:

Zhu was born in Maryland and grew up in California. He trained at the San Francisco Conservatory of Music Francisco and the Juilliard School, studying with Li Lin, Itzhak Perlman and others.

Founded in 1954, the Paganini International Violin Competition has awarded its top prize to a number of outstanding violinists, including György Pauk, Salvatore Accardo, Gidon Kremer, Leonidas Kavakos and Ilya Gringolts.