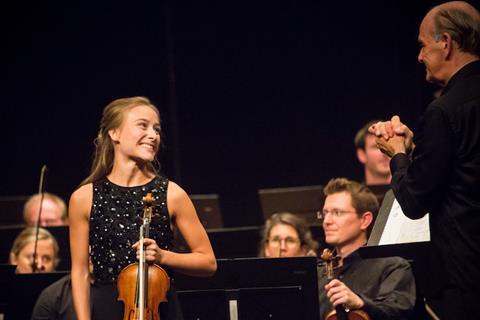 Following a two-part final featuring a chamber music round (joining members of the jury in a piano trio) and a concerto with the Lausanne Chamber Orchestra conducted by Gábor Takács-Nagy, the violinist Anna Agafia Egholm was announced as the winner the Tibor Varga at Ferme-Asile in Sion, Switzerland. The 22 year-old Danish violinist, who was also a finalist in the Carl Nielsen Competition earlier this year, receives CHF20,000 (c. $20,000) plus concert opportunities.

In addition, Egholm received the Tibor Varga Award, for the best interpretation of  the new work: RI-trato by Heinz Holliger.

Egholm, who has just completed her master’s degree at the University of Music in Lausanne in the class of Svetlana Makarova,has performed as a soloist with ensembles including the Danish National Symphony Orchestra, the Bergen Philharmonic Orchestra, Malmö Symphony Orchestra and the Filarmonica de Stat Transilvania. On Saturday evening she played Beethoven’s D major concerto.