A piece of cake: the LPO celebrates 90 years with music-loving Bake Off contestant 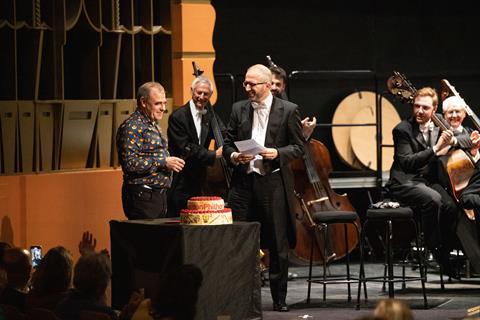 On Saturday 22 October, 2021 Great British Bake Off semi-finalist and London Philharmonic Orchestra (LPO) fan Jürgen Krauss presented the orchestra with a cake he made for its 90th birthday. The trombone player and Brighton resident cut the cake on stage at Brighton Dome, where the orchestra has a residency, alongside co-principal horn and vice-president Mark Vines.

Speaking a few words to the audience, Krauss explained that he had always enjoyed classical music and his connection with the LPO had been cemented when one night, he and his wife found themselves on the same train to Brighton as the players.

‘We got chatting with the players in our carriage and thoroughly enjoyed getting to know them,’ said the baker. Krauss showcased his love for classical music during Dessert Week in last year’s competition when, for the Showstopper challenge, he hand-piped music from a 16th-century song by Henry VIII onto a collar which he then wrapped around the outside of the cake. He even sang the tune as Paul Hollywood and Prue Leith judged the bake.

The orchestra, having performed Sibelius Violin Concerto with Augustin Hadelich in the first half, then played Happy Birthday before LPO principal guest conductor Karina Canellakis conducted the second half of the concert comprising Beethoven’s Symphony no. 3 ’Eroica’. 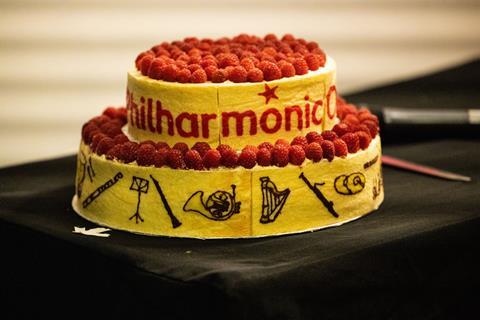 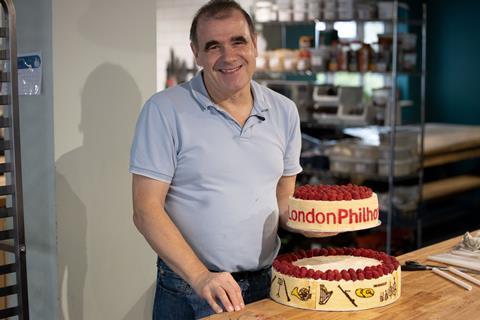 The cake was divided up backstage and enjoyed by the musicians after the concert. The two-tiered cake had five lines made out of dark ganache running through it, imitating a musical stave. The raspberry flavour paid tribute to the orchestra’s pink logo and the outside was decorated with different instruments.

Krauss’s cake proved to be a hit with the many Bake Off fans in the LPO, including first violinist Minn Majoe. ‘We had been looking forward to this for a while,’ Majoe told The Strad. ’The cake was absolutely delicious, definitely a showstopper! I loved his interpretation of the musical theme. It was such a treat to have a wonderful birthday cake waiting for us after the concert and great to have Jürgen join us in person.’ In news that will please Bake Off fans, Majoe also confirmed the cake had ‘no soggy bottom in sight.’

The LPO turned 90 on Friday 7 October 2022, having been founded by conductor Sir Thomas Beecham in 1932. Since then it has maintained international status and has also recorded soundtracks for numerous blockbuster films, including The Lord of the Rings trilogy.

It has performed at the Southbank Centre’s Royal Festival Hall since it opened in 1951, becoming resident orchestra in 1992. It also has residencies in Brighton, Eastbourne and Saffron Walden as well as being resident at Glyndebourne Festival Opera for over 50 years, where it performs each summer.