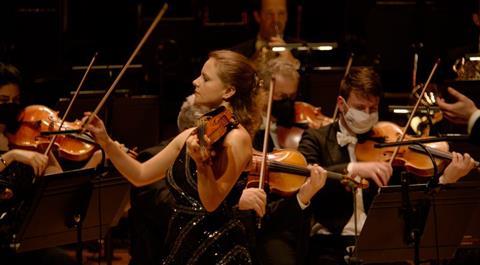 There were just two big works on this programme, one well known, the other considerably less so. Elgar’s Violin Concerto came first. After the declamatory grandeur of the opening, Julia Fischer played with an intensity of sound which took her to the edge of a rasp. She and Vladimir Jurowski pressed ahead purposefully towards the second subject, wistful and vulnerable, before a fierce build-up to the great tutti.

In the development Fischer’s playing was variously capricious, languid and dancing, marked by constant dynamic flexibility and underlying propulsion. In the slow movement the richness and intensity that had appeared earlier returned, with Fischer seeming to quarry sound out of the violin, playing with great expressive vibrato, balanced by gossamer lightness and delicacy.

The finale, for all its passages of mercurial dance and limpid melody, had an underlying seriousness of purpose. With the great cadenza Fischer entered a different world, fluid, eloquent and intimate. For an encore she, with Jurowski at the piano, played Ukrainian composer Valentin Silvestrov’s Lullaby from Cycle III of his Melodies of the Moments, with gentle, poised lyricism.

After the interval came Enescu’s Second Symphony, a terrific, complex work in which the orchestra acquitted itself honourably, albeit with some looks of relief at the end.

Read: ‘Joyfully, with a lot of spirit’ - Julia Fischer on Beethoven’s Violin Concerto