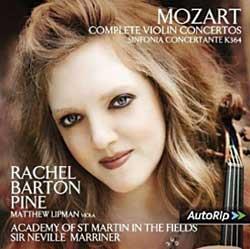 This double-disc set is a mixture of old and new. On the one hand, it represents an established approach to Mozart performing practices, favouring precision, clarity and traits of style we expect in such repertoire. There is crisp articulation here, with clean sonority, moderate vibrato and careful small-scale phrase nuances. On the other, one is introduced in the Sinfonia concertante to violist Matthew Lipman in his debut recording, and throughout the concertos one hears Rachel Barton Pine’s own cadenzas.

Indeed, there is little here to which one may reasonably object. Lipman and Pine are well matched in the Sinfonia concertante, the orchestra is pretty much bomb-proof and the sound in Avie’s recording balances a good degree of ambience with close detail – there is some lovely crisp playing with a good sense of bow contact in K207, for example, while the slow movement of K219 stands out for me in an unpretentious but poetic reading. All of these things – in the context of a consistent and appealing set – are what one might expect of such a high-quality line-up. I wasn’t always convinced by the stylistic marriage of cadenza and thematic material, as in the case of a rather long first-movement cadenza in K216. Otherwise, I would have liked a bit more softening of the rhythmic edges to imbue these light, galant-inspired compositions with a bit more spontaneity; but these are minor criticisms in a pleasing set.