In this extract from the August 2021 issue, Gennady Filimonov introduces the Herrmann family of bow makers and their close connections with their contemporaries the Knopfs 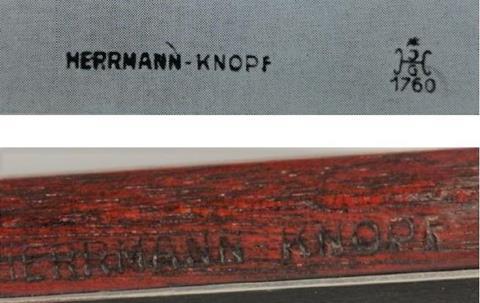 Several bows by Lothar Herrmann (1914–87) are branded ‘HERRMANN–KNOPF’, emphasising the link between the families

The following extract is from The Strad’s August issue feature on the Herrmann bow making dynasty ’An enduring legacy’. To read it in full, click here to subscribe and login. The August 2021 digital magazine and print edition are on sale now

In the 19th century, the German city of Markneukirchen was one of the global centres of bow making. It is understandable, then, that the people involved in the industry there might come together and their family lines might merge. While researching my article for The Strad on the Knopf family of bow makers (‘A tangled web’, June 2021) I repeatedly came across links with the Herrmann family of bow makers. Not only is the dynasty contemporaneous with the Knopfs, it actually lasted for longer; for while the Knopf dynasty ended with the demise of Henry R. Knopf in 1939, the Herrmanns continued making bows until the last surviving bow maker, Lothar Herrmann, died in 1987.

The Herrmanns’ bow making style is also linked to that of the Knopfs – not least because the family members worked together in the same shop, which frequently did business with Nikolai Kittel in Russia. And indeed, the two dynasties merged quite early on, with the marriage of Christian Friedrich Herrmann to Carolina Wilhelmine Knopf in 1861. One might even call the subsequent line the ‘Herrmann–Knopf dynasty’ of bow makers.

According to family chronicles, the Herrmann dynasty can be traced back at least six generations in Saxony’s Vogtland region to Johann Gottfried Herrmann. He may have been born around 1740 and is named as its first bow maker, who founded his workshop in 1760. This is commemorated in the first Herrmann family monogram, which can be found on several of the family’s bows. However, it is still uncertain whether he made any bows. In the Markneukirchen cemetery records, his occupation is given as ‘Master shoemaker’, and the date of his death as 1 January 1817. Since craftsmen such as Johann Gottlob Knopf (1731–86), a tailor, turned to bow making as the industry in Markneukirchen flourished, it could be hypothesised that Johann Gottfried Herrmann did the same. Unfortunately documentary evidence of his birth or his activities as a bow maker have so far yet to be found. Perhaps further search in the church registers in Markneukirchen might yield results.

Another of the early Vogtland bow makers, Josef Strötz (1715–60), started out as a musician and carpenter/cabinet maker. He immigrated to the region from Bavaria and then devoted himself entirely to bow making. His granddaughter Eva Margarethe Strötz married Christian Gottlieb Herrmann (1783–1845), son of Johann Gottfried, who worked as a shoemaker and farmer. He later joined Markneukirchen’s city gendarmerie. The couple had at least two children, both of whom became bow makers: Heinrich Wilhelm (1807–48) and Christian Friedrich (1819–96). Wilhelm enjoyed an excellent reputation as a bow maker in Markneukirchen and later in Landwüst, although unfortunately his bows were only occasionally signed as his clients requested unsigned deliveries. On 19 November 1831 he married Christiana Wilhelmina Kretzschmann from Markneukirchen, The couple had a son, Friedrich Alexander (1845–99), who became a bow maker in the family tradition, and worked in Wernitzgrün.

Chr. Friedrich learnt bow making in the workshop of Christian Wilhelm Knopf and worked for a long time with his future father-in-law Karl Wilhelm Knopf and brother-in-law Heinrich Knopf. Between 1860 and 1868, Chr. Friedrich was one of the principal collaborators, along with Heinrich and other members of the Knopf family, producing bows for Nikolai Kittel, Ludwig Bausch and Charles Bruno in New York, and other shops. The Herrmann–Knopf family connection undoubtedly helped to combine their mastery and expertise, which proved beneficial to the quality of their bows. Chr. Friedrich briefly worked independently in Schönlind, about two miles south of Markneukirchen, and later retired there, eventually dying in the town in 1896. He, too, never stamped his bows, although according to written accounts, and oral tradition from his contemporaries, he was a superb bow maker whose bows were highly valued.

While still at the Knopf workshop, Chr. Friedrich fell in love with Heinrich Knopf’s sister Carolina Wilhelmine (1832–1917), and they married in 1861. Thus, two of the oldest bow making dynasties in Markneukirchen merged. The marriage produced three sons: Friedrich August (1863–1945), Karel Ludwig (1866–1945) and Franz Albert (1868–1960). All were born into the Knopf family workshop in Markneukirchen and all three followed the family tradition of bow making.