In this extract from the November 2019 issue, Raphael Gold tells the story of Ernst Lohberg, one of three outstanding makers from the early-20th century who trained at William Lewis & Son and whose work was revered by Heifetz, Milstein and Stern 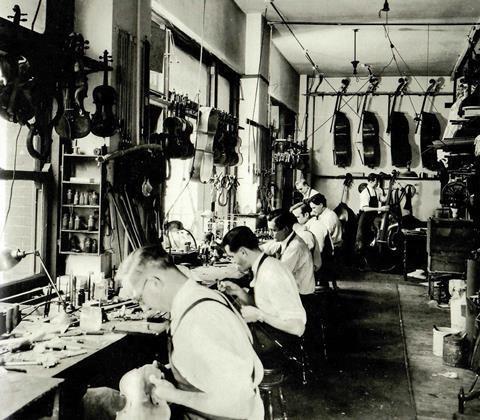 The workshop of William Lewis & Son, Chicago, c.1930, around the time Kovanda, Lohberg and Halvarson would have been working there

Arguably the best American bow makers of this generation were Frank Kovanda, Ernst Julius Lohberg and Anders Ernfried Halvarson. All three of these makers worked at the well-known Chicago shop of William Lewis & Son in the 1920s, before continuing their work in different parts of the country. All three had popular followings during their lifetimes, from high-calibre musicians in top American orchestras to studio musicians throughout the nation. They were also among the best repairmen of their generation, working with such musicians as Heifetz, Milstein and Stern. Kovanda, Lohberg and Halvarson all had in common a reverence for the great master F.X. Tourte; a predilection for innovative designs; and impeccable workmanship. And although their effect on American bow making was not as influential as that of William Salchow in New York, their work had an impact on a generation of American musicians in profound if unseen ways.

Born in Brunskog, Sweden, on 29 December 1901, Ernst Julius Lohberg (‘Ernie’) immigrated to the United States through the port of New York on 23 February 1926, aboard the SS Gripsholm. On the ship’s manifest, Lohberg was listed as snickare (carpenter). His father, Olov Lohberg, already lived in Chicago, the most likely reason why Lohberg settled there. He probably started working at Lewis’s within the year after his arrival, and while it is still not known how he was hired there, his training as a carpenter would certainly have helped. Like Kovanda he probably did not have a formal apprenticeship, but was well trained in violin and bow repairs, his talent in bow work being immediately apparent. By 1961 Lewis’s was advertising him as a nationally respected bow repair expert. He would have fitted right into the workshop community, not only because there were several fellow Swedes there, but because the culture of the shop was of passionate innovation in repairs and construction.

To read the full article by Raphael Gold, in which the author details the lives and careers of these exceptional makers, and reveals the tools of their caft, click here to log in or subscribe