'It has a rich sound, powerful without being shrill or strident' 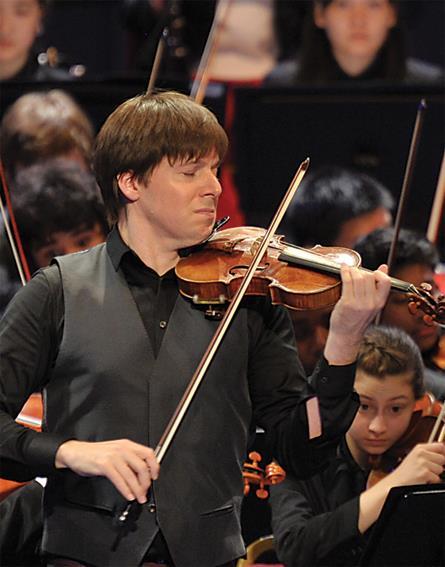 The November 2013 issue features not only a five-page interview with US violinist Joshua Bell (pictured at the 2013 BBC Proms), but also a seven-page examination of his violin, the 1713 Stradivari that once belonged to Bronislaw Huberman. Luthier Sam Zygmuntowicz first encountered the violin in 2003, and has studied it and made small modifications over time. Here, he asks Bell about the instrument and the changes it has made to his playing:

A word I often use is 'chocolatey' – it has a rich sound, powerful without being shrill or strident.

I am a Strad guy, and always have been. I first got to understand the Strad sound from my teacher Josef Gingold's early-period Strad made in 1683. It had the unique sweetness that I always associate with Strad violins. I later bought the c.1732 ‘Tom Tyler’ Strad which had some of the sweetness but a much deeper lower register – more like a Guarneri, which is typical of Strad's later period.

When I first played the ‘Huberman’, I realised it had the most amazing combination of sweetness, power and richness – the perfect blend of all of those qualities. I was so infatuated with its sound on the day I stumbled upon it, at Charles Beare's shop in London, that I insisted on performing on it that very same night at the Royal Albert Hall. I was playing two very demanding concertos that night, and normally I wouldn't dream of playing on a 'new' violin without weeks of adjustment, but I was so in love. Once I played a few notes on the ‘Huberman’, there was no turning back!

I was immediately comfortable with the ‘Huberman’. I felt as though it was made for the way I use the bow. What I love about the ‘Huberman’, and what I tend to like about Strads in general, is the variety of colours that one can make from using different bow speeds. One can barely touch the string and it will speak, and the softest pianissimos will carry to the back of the concert hall. As intoxicating as a Guarneri can be, my playing suits a Strad much better, because of its immense power and its ability to handle very strong bow pressure.

Unlike some Strads, though, the ‘Huberman’ has a deep and powerful G string, almost Guarneri-like, and it can also handle a fair amount of pressure without cracking. On this matter, I must also credit Sam Zygmuntowicz's bridge. The adjustment of a violin is crucial, and Sam and I have worked together for years, experimenting and fine-tuning bridges, and because of that the violin has become better and better.

It certainly did. Many things became much easier when I started playing on the ‘Huberman’. I could project in a hall easier without working so hard. With the new violin and the new colours to work with, I started reimagining the works that I had played for years. Even fingerings changed as I discovered that I could use different strings on the violin for certain passages, because of the clarity high up on the A, D and G strings, which allowed me to attempt things I wouldn't have dreamed of on another violin.

Naturally, there were still moments when I missed the ‘Tom Tyler’. Like people, each instrument has its own strengths and its unique personality. There are certain sounds I could get on the ‘Tyler’ that I will never be able to get on the ‘Huberman’, but that's how it goes. I wish I could have kept the ‘Tyler’ when I bought the ‘Huberman’, but of course I couldn't afford it!

Does the history of this violin consciously affect your experience of playing it?

Every time I open my violin case and find this treasure inside, my heart jumps just a little bit. This 300-year-old artifact is the perfect unity of art and science, one of the most remarkable constructions made by a human being. The fact that it was also once owned and played by Bronislaw Huberman, one of the greatest violinists of all time and one of the most important historical figures in music, only adds to that sense of awe that I feel. It makes me want to practise.

Check out the digital version of the November 2013 issue

Read: The thief, his wife and the ‘Huberman’ Strad