The 17-year-old Kronberg Academy student took home the top prize of €10,000 for her performance of Prokofiev's First Violin Concerto 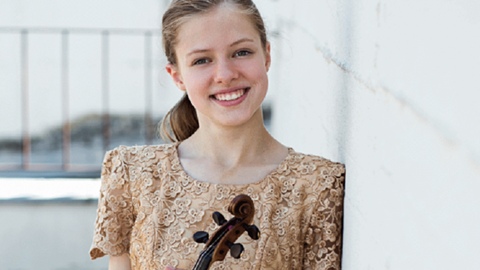 Lara Boschkor was named the winner of the Tonali Violin Competition in Hamburg, Germany on Saturday. The 17-year-old Kronberg Academy student took home the top prize of €10,000 for her performance of Prokofiev's First Violin Concerto with the North German Philharmonic Youth Orchestra in the final, held in Hamburg's brand new Elbphilharmonie.

'For me the past Tonali week was extraordinary,' said Boschkor. 'It was so different from all the competitions I have previously attended. There was the feeling of being able to make music - in the circle of people you know and love. Tonali touched me in a way that made me human and a musician. I am so grateful!'

Held annually, the Tonali competition concentrates each year on one of three instruments - violin, cello and piano. Open to musicians residing in Germany between the ages of 16 and 21, the contest includes community performance elements, matching each of its 12 finalists with a different local school.