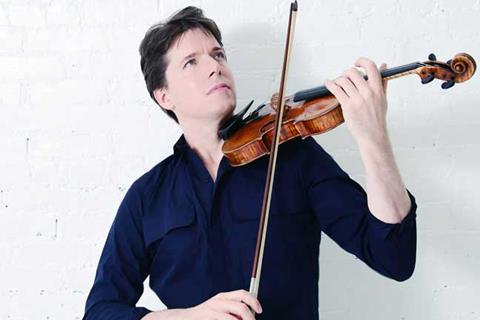 The American violinist Joshua Bell began his musical education by attempting to pluck out music on stretched-out rubber bands. Soon afterwards, aged four, he started violin lessons. Taught by pedagogues including Donna Bricht,  Mimi Zweig and Josef Gingold, he made his first major professional appearance, aged fourteen, as a soloist with the Philadelphia Orchestra conducted by Riccardo Muti. Since then he has performed in major venues all over the world, as well as in less conventional settings, not least, the Metro subway station L'Enfant Plaza in Washington, DC where, in January 2007, he played as an incognito busker. Artistic partner for the Saint Paul Chamber Orchestra  visiting professor at the Royal Academy of Music, and Music Director of St Martin in the Fields,  he plays a 300-year-old  Gibson ex Huberman Stradivarius and has a vast, wide-ranging discography.