Contrary to current thinking, a light vibrato was the order of the day for 18th-century musicians, asserts Beverly Jerold 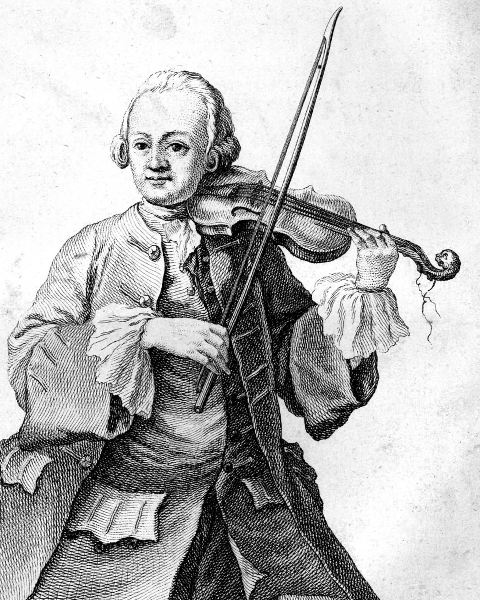 Today’s specialists in early music play with a minimum of vibrato and consequently with a light, delicate bow stroke, which yields a tone that might be described as thin and lacking in colour. But early writers, such as Johann Friedrich Reichardt, Kapellmeister at the Berlin court, tell a different story. As reported in Berlin’s 1791 Musikalisches Wochenblatt, he had attended a 1785 programme given by the Concert of Ancient Music, comprising London’s best musicians, and found that a buffer zone had been left between the orchestra and the high-society audience:

‘I very much like having the instruments at a distance, for when they are close, particularly the string instruments whose every separate, strong stroke is always a powerful shock, it makes an extremely adverse, and often painful and long-lasting impression on my nerves.’

A strong violinist himself who had travelled far and wide to hear every reputable orchestra, Reichardt implies that these nerve-rattling bow strokes were the rule in symphonic playing. His article also stresses that Handel’s orchestral music needs to be played with ‘powerful tone from all the instruments’.

What then is the basis for our delicate playing? It seems to be an inference drawn from our belief that vibrato was an ornament restricted to soloists and used sparingly. Because a stringed instrument played loudly without vibrato is displeasing, we play with subdued volume. But this is at odds with reports about 18th-century orchestral playing, so perhaps the early sources have been misinterpreted. The present position may be summarised by The New Grove Dictionary of Music and Musicians (2001, Vibrato):

‘[Vibrato] seems always to have been accepted as an ornament until the first quarter of the 20th century, when its continuous use gradually became the norm… During the Baroque era, vibrato was used sparingly, for emphasis on long, accentuated notes in pieces with an affect or character to which it was suited. Being regarded as an ornament, in principle it was used on single notes like any other… Less common ornaments such as vibrato or glissando were in theory used only by soloists… Continuous vibrato is a 20th-century phenomenon.’

In early texts, vibrato can range from barely perceptible to one employing such distant microtones as to sound out of tune. Because our ears have been fine tuned by exposure to world-class artists, no musician today would use the latter. Before recording technology, however, musicians with good ears were much more exceptional. The type of vibrato called an ‘ornament’, which often veered into poor intonation, was rightly restricted by 18th-century writers. Very different, however, was the matter of how to obtain good tone quality on an instrument. Here, the singing voice was the role model and a light vibrato the means for achieving it. In reading early texts, we need to determine whether the subject under discussion is a vibrato intended to imitate the singer’s natural vibrato or a more intense, artificial undulation, of the type called an ‘ornament’. All singing voices vibrate and early sources never suggest repressing this sound unless it is an out-of-tune wobble.

Attention today has focused on the artificial tremolo that Leopold Mozart’s 1756 Versuch einer gründlichen Violinschule warns against using too frequently. But he presents a very different form of vibrato earlier in his book:

This vibrato is unnamed, has no limitations and is simply part of good string technique. In contrast, tremolo must be rationed. That these are different entities is confirmed by his index, in which tremolo is treated in chapter eleven. Light vibrato, however, is indexed as ‘Movement of the hand when holding out a long note’ (Bewegung der Hand beym Aushalten einer langen Note) and included in chapter five’s bowing techniques for achieving good tone.

Vibrato as an ornament differs from light vibrato in being stronger, using more distant microtones to produce the pitch instability and also being measured and slower. Because of its potential intonation problems, ripienists – not leaders or soloists – were advised against it. On the other hand, standard light vibrato, which only imitates the warmth of the singing voice, had no such restriction.

Vibrato as an ornament

The story of how we came to believe that vibrato in 18th-century music should be rationed begins with a 1751 instruction for violin vibrato (‘close shake’) in the Art of Playing on the Violin by the famed Italian violinist Francesco Geminiani:

'Of the Close SHAKE… To perform it, you must press the Finger and out slowly and equally, when it is long continued, swelling the Sound by Degrees, drawing the Bow nearer to the Bridge, and ending it very strong it may express Majesty, Dignity, &c. But making it shorter, lower and softer, it may denote Affliction, Fear, &c. and when it is made on short Notes, it only contributes to make their Sound more agreable [sic] and for this Reason it should be made use of as often as possible.'

Geminiani’s vibrato is applied frequently, but we cannot judge its degree. Perhaps imitators exaggerated it to the point of becoming offensive to those with more refined ears. Thus in 1777 his former pupil Robert Bremner, explaining that the ‘tremolo’ equals the ‘close shake’, adds a word of caution (reprinted Musical Quarterly 69, 1983, 245f.), which today has been interpreted as advising soloists to use ordinary vibrato sparingly and ripienists, not at all:

'Many gentlemen players on bow instruments are so exceeding fond of the tremolo, that they apply it wherever they possibly can. This grace has a resemblance to that wavering found given by two of the unisons of an organ, a little out of tune; or to the voice of one who is paralytic; a song from whom would be one continued tremolo from beginning to end… The proper stop [to place the finger] is a fixed point, from which the least deviation is erroneous: consequently the tremolo, which is a departure from that point, will not only confuse the harmony to the hearers who are near the band, but also enfeeble it to those at a distance… Its utility in melody may likewise be doubted, because no deficiency is perceived when it is omitted by good performers.'

Bremner argues against a tremolo that is out of tune, one that resembles the unsteady voice of a wayward singer. Nothing suggests that he objects to the light vibrato meant to imitate the human voice. Moreover, he finds the melody ‘not deficient’ when this tremolo is omitted by good performers: the same cannot be said of one played without light vibrato.

In his 1783 Magazin der Musik, Carl Friedrich Cramer translated Bremner’s passage into German, adding his own reaction which confirms that this tremolo (Bebung) must be created artificially, even by singers:

‘To me, the author of these remarks appears to be much too opposed to the Bebung… To be sure, a generally tremulous, unsteady voice is counted as the first among errors… For the accomplished singer, however, arias and recitatives often have sections of powerful emotion where, if declamation and imitation of the specific expression of each emotion are essential, the Bebung is even obligatory.’

‘[With the Bebung] one does not hold a long sustained tone completely steady, but lets it waver and float, without making it higher or lower [in pitch]. On string instruments, it is easily made by rocking the fingers back and forth on the string. For the singer who wants to produce it simply with the larynx, it is more difficult; some facilitate it by moving the lower jaw.’

Because the voice must create this Bebung