How to start approaching the dense scores of New Complexity composers

In the first of a two-part guide, Pwyll ap Siôn looks at the challenges presented in performing works by composers associated with the New Complexity movement – and offers tips on how to approach the extended techniques and rhythmic difficulties involved 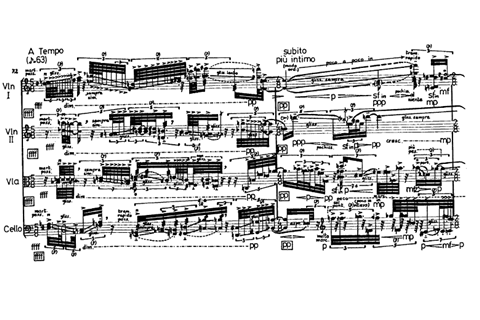 Bars 72 and 73 of Brian Ferneyhough’s String Quartet no.2

The following is an extract from a longer article in The Strad’s October 2017 issue – to read the full article, download the issue on desktop computer or via the The Strad App, or buy the print edition

New Complexity was once the purview of specialist groups such as the Arditti Quartet, Elision Ensemble, Ensemble Recherche and Ensemble Exposé, but the last two decades have witnessed the emergence of a new generation – quartets such as Diotima and Jack, and soloists such as violinist Takao Hyakutome and the brilliant cellist Séverine Ballon – who have injected colour and imagination into performances of complex contemporary music, transforming dense and demanding scores into vivid, compelling and spellbinding soundscapes.

The reluctance to embrace New Complexity may partly stem from the way the music looks as much as from how it sounds. Even for those with experiences of performing the music of post-war avant-garde composers such as Boulez and Stockhausen, looking at a Ferneyhough score for the first time can come as a shock. Moreover, it can make performers uncomfortably aware of their own limitations. But, as with most things, the more familiar one becomes with this music, the less daunting it seems. The level of difficulty will always remain with New Complexity, but there’s no reason why it can’t be turned into a positive feature. Classical musicians thrive on the challenges posed by the music of the past, so why not approach this music with a similar attitude? In fact, part of New Complexity’s ‘performance dynamic’ is to tease out the struggles that are germane to its aesthetic and harness them to positive ends.

To read the full article download The Strad’s October 2017 issue on desktop computer or via the The Strad App, or buy the print edition