From the Archive: the ‘Charles Reade’ Guadagnini violin, Milan, 1750 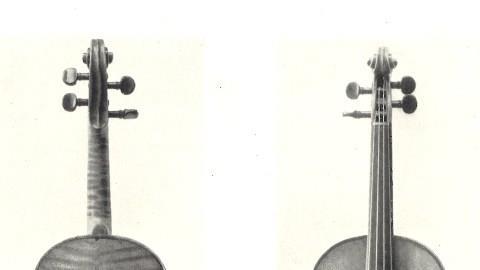 This illustration of a violin by JB Guadagnini was published in The Strad, November 1925. The following text is extracted from an article accompanying the photographs:

This noble instrument has Guadagnini tone to perfection. It has that special feature of heavily wooded violins, that the instrument requires some half-and-hour’s playing to produce the maximum of tone, but when that point is reached, the ‘Charles Reade’ carries all before it.

This is one of the most perfect and pristine examples in existence. It is deep red in colour, and glows in the sunlight like a vast jewel.

The violin was discovered in Italy by Charles Reade, who in due course disposed of the instrument to the late George Hart. It rested for many years in one of the finest English collections of violins as has been formed in modern times, and recently became the property of its present owner Mr Gustavo Herten. It is known that the violin was much admired by Joseph Joachim, who attempted on several occasions to acquire it.