From the Archive: the 1730 'De Munck-Feuermann' Stradivarius cello

This photograph was published in the April 1988 issue of The Strad. The following text is extracted from the accompanying article: 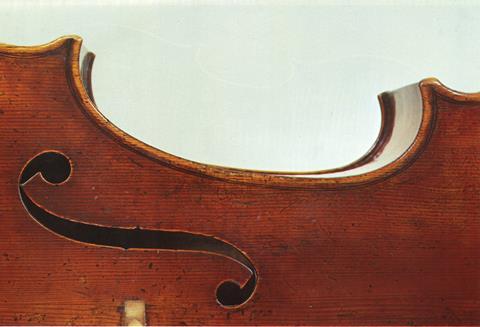 [Feuermann] had occasion once to visit Hill’s [W.E. Hill & Son, London] with his student, Mosa Havivi, who needed a good instrument. It was at this time that Alfred Hill showed Feuermann an intriguing Strad cello that was available. Feuermann thought little about it then, since he was still playing the Montagnana in and was about to leave with it on his first world tour. However, his nagging dissatisfaction with the Montagnana’s rather slow response and its lack of fire … kept the Strad at the back of his mind.

The Strad – the Hills called it alternately the ‘de Munck’ or the ‘Gardiner’ – was a medium-sized instrument. It was 29 1/2 inches [749mm] in length with normal proportions, in beautiful condition, with a lovely chestnut-brown varnish. And it was late, 1731 [date now believed to be 1730]. The consensus of concern was that while the modelling probably represented a final Strad experiment (there are several others of this size among the late instruments …), it was probable that the sons had also had a hand in its construction. There could be no doubt that it was by and large the master’s conception and work. The only problem was the relative obscurity of the instrument and Hill’s somewhat diffident approach to its history. The fact that Hill’s had had it for at least eight years puzzled Feuermann. Why hadn’t they sold it in this time, or even shown it to him at the time that he was looking to replace the Tecchler?

These caveats were all submerged when he began to play the cello. The clarity and power of the upper register, the richness without boom or groan on the lower strings gave the instrument a blance that he had not experienced before. there was no heaviness in the sound – the fastest passages left his bow with unsurpassed clarity.

In later years, Feurmann would talk to friends about what the instrument had done for him … There could be no other instrument like it, at least for him, had he searched for decades. He honestly attributed his growing success as a concert artist after 1935 to the interpretative possibilities, both in technique and in expression, that the ’de Munck’ Strad gave him.

The instrument is now owned by the Nippon Music Foundation. It was played for a time by Steven Isserlis and now by Danjulo Ishizaka

Watch (from 2014): Steven Isserlis on period instruments and his Stradivarius cello