Desmond Cecil: my search for the perfect violin 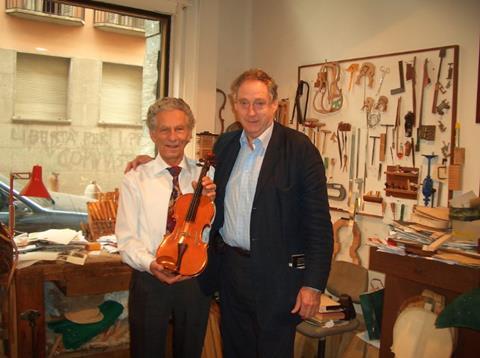 The former diplomat Desmond Cecil CMG has recently published his memoir, The Wandering Civil Servant of Stradivarius, in which he details his time as a professional violinist.

My wife’s aunt Emmie Hess, an excellent cellist with whom I played quartets, kindly gave me a violin made by the doyen of Cremonese makers Gio Batta Morassi in 1974. It is modelled on the 1715 ’Cremonese’ Stradivari violin, now in the Cremona Museo del Violino. In 2004 I was in Cremona and showed it to Morassi himself, which he was very pleased to see. The violin is still in lovely, virtually mint condition; the tone is bright and resonant and improves all the time with playing.

After many happy years with my fine 1754 Guadagnini I decided to make one final change in my violinistic life, before old age finally set in. Accordingly in 2001 I started to look around the violin dealers of Europe, many of whom I had known over the years. I saw and tried many fine instruments, including the Stradivari 1720 ‘Rochester’, 1669 ‘Clisbee’, c.1718 ‘Szekely’, 1716 ‘Milstein’ and 1722 ‘de Chaponay’ (which I had known half a century earlier when it had belonged to my fellow Rostal pupil, American Larry Homolka, son of the illustrious actor Oscar), as well as violins by Bergonzi, Guarneri, etc. – most of which were way above my price range.

Finally I saw at Beares a 1724 Stradivari, which was little known, not in any of the major reference books, and which had not been played seriously for many years, having been with a family in Northern Italy since early in the 19th century. Accordingly, the sound was somewhat dead – a well-known soloist had played it with only limited results - but I thought that I could remedy that in time. In addition, because it had lain in a wooden case for so many years, it had been attacked by woodworm, as often happened with such old instruments, mainly in the table, but fortunately hardly at all in the back.

However the beautiful golden red varnish, especially on the back, and the cut of the woodwork – corners, purfling, f-holes, edges and scroll – were all still amazingly ‘fresh’ and pure. Of particular note, the varnish had not been polished or retouched, as happened to many great violins, especially in the nineteenth century, but remained very much as the master had finished it. The scroll especially showed very clear signs that the violin had been made entirely by Stradivari himself – even with a few slips of the chisel for which we can forgive the 80-year old Antonio – rather than completed by his sons Omobono or Francesco, as often happened with some of his instruments in his later years. 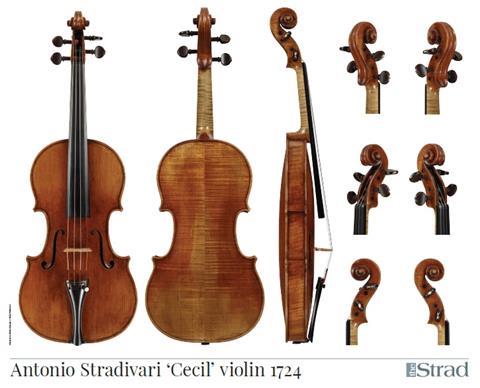 The violin was fully certified by the doyen of the violin trade, Charles Beare, as ‘absolutely authentic’, including Stradivari’s original 1724 label ‘Antonius Stradiuarius Cremonensis Faciebat Anno 1724’ – and his later corrected ‘spelling mistake’ with a ‘u’ rather than a ‘v’. We also had papers of authenticity from Alfred Hill of the leading Hill family of violin experts, who described it as ‘bien authentique’, and from the renowned French luthier Charles-Eugène Gand of Paris, who had expertly restored the woodworm damage in 1887 and very clearly describes this 1724 violin in his Catalogue descriptif des instruments de Stradivari et Guarnerius del Gesù (Vingt années d’expertise d’un grand luthier parisien; 1870-1891) – ‘Fond de 2 pièces. Jolie tête. Vernis rouge doré’.

We also found a likely reference to this violin in the Catalogo of 1808 by the renowned Italian collector Count Cozio di Salabue, who praised its construction and varnish, and its ‘very strong voice, almost tenor – for its rare voice [it is worth] 140 luigi’. The Count’s writings are always notoriously complex to interpret, but nevertheless we have so far found no other 1724 Stradivari that matches his description.

In addition to Charles Beare, respected UK luthiers such as John Dilworth had no doubts about its purity and its authenticity, which was also largely confirmed from expert dendrochronological analysis by the authoritative Peter Ratcliff. He stated that the wood of the table came from the same period as well-known 1723-1726 Stradivari violins, such as the 1723/1725 ‘Duke of Edinburgh’, 1725 ‘Hammig’, 1726 ‘Hilton’ and 1724 ‘Abergavenny’, and indeed probably came from the same tree. The violin was from Stradivari’s later period, when he was 80 – and he still had 13 years of his working life to go - with the slightly darker tone of that later period which is greatly sought after by the great soloists. It was made from his PG (più grande) model and, at 356 mm, was of a comfortable length for me.

Very few 1724 Stradivaris are known to exist, most famously the great Spanish violinist Pablo de Sarasate’s favourite Stradivari, which is now on permanent display at the Paris Musée de la Musique – and which we think that Cozio refers to in his Catalogo of 1818, with a yellow varnish and valuing it at the slightly lower price of 130 zecchini. It is similar in appearance to mine, although some experts, for example John Dilworth, say that mine is better preserved – woodworm restoration notwithstanding. Of the two 1724 Stradivaris described in his Catalogo, Count Cozio preferred the one which we think refers to my one.

Because of the somewhat dead tone, the restored woodworm damage and it being relatively unknown, the price was less disastrous than it might have been with a more famous instrument. Accordingly, after the inevitable financial juggling, including extending the mortgage on our house, I took a risk and bought it in 2004. As I had hoped, after a couple of years the sound came back to its original glory. The G and E strings had always been quite strong, but the upper reaches of the D and A strings less so. I put on lower-tension strings, to allow the old wood (a violin is made of some 70 pieces of wood) to vibrate more fully, and a respected local luthier, David Hume, put on a slightly more resonant bridge. Otherwise I did nothing other than play it very regularly – and of course learn the technique of how to coax, rather than force, the sound out of a Stradivari. The full resonance was restored across all the strings, and it re-found the astonishing Nachklang (lingering tone) for which such instruments are renowned.