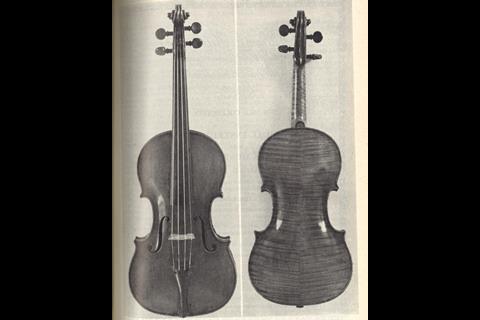 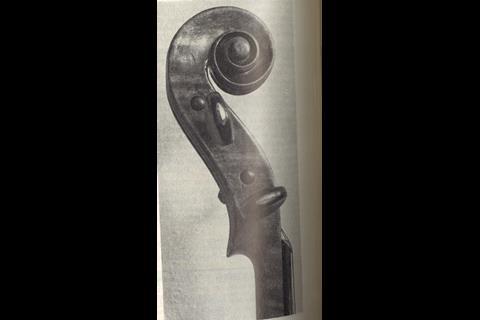 This illustration of a 1760 P.G. Mantegazza violin was published in The Strad, October 1969. The following text is extracted from an article accompanying the photographs:

Pietro Giovanni Mantegazza is the best known of a prominent group of makers, dealers and restorers who worked in Milan during the 18th century. Today the Mantegazzas are especially renowned for their excellent small size violas of which a number have survived in almost mint condition.

This month’s illustration is of a bold and handsome violin by Mantegazza which Messrs. William E. Hill & Sons describe as being ‘in a very good state of preservation’. The workmanship of all the members of this family is uniformly good and is also the modelling of their later dated instruments. The form is generally that of the large model of Nicolo Amati.

The two piece back of this instrument is of handsome wood marked by a curl of medium width slanting upwards from the joint, that of the sides is similar, the head being marked by a faint curl. The table is of pine of even grain, and the varnish of an orange-brown colour. The principal measurements are as follows: Length of Body, 14 1/8 inches; Upper Bouts, 6 9/16 inches; Middle bouts, 4 3/8 inches; Lower Bouts, 8 1/8 inches.