From the Archive: a Giuseppe Guarneri del Gesù violin, 1736 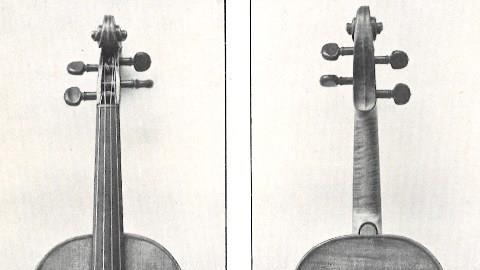 This illustration of a Giuseppe Guarneri del Gesù violin was published in The Strad, July 1915. The following text is extracted from the article accompanying the photographs:

According to Messers Hill’s certificate, this instrument is ‘a characteristic example in good preservation, the back in one piece, of broadish curl; the curl of the wood of the sides is smaller, but of more figure; the marking of the wood of the head nearly plain; the wood of the belly somewhat uneven in grain, and the soundoles more open than usual; the varnish of a golden orange.’

There is not even a suspicion of the pointed form about the upper and lower turns of soundholes, but it does not follow that their original shape has been tampered with. Del Gesù varied the shape of his fs considerably, a condition of things which is not to be wondered at if we accept the current explanation of the way in which he set about cutting them. In the great majority of cases there is no indication whatever of a template being used.

As to the extra width of the openings of the holes in the specimen, I must confess I suspect these have been somewhat enlarged by some improving hand, the owner of which should have been promptly hanged without benefit of clergy. There is at least the satisfaction of knowing the tone gives no indication of having been impaired in the process.