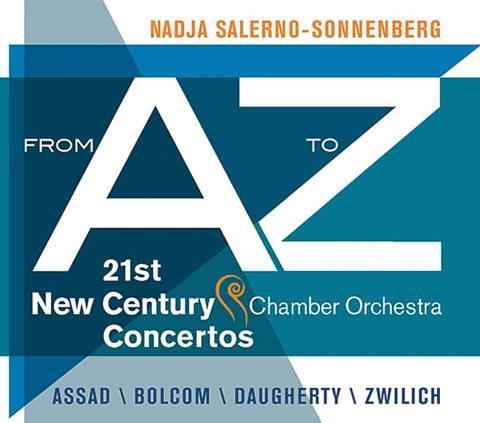 Violinist Nadja Salerno-Sonnenberg has commissioned several new works since becoming music director of the San Francisco-based New Century Chamber Orchestra (NCCO) in 2008 and this engaging disc brings together four of them – in this case a quartet of contrasting concertos showcasing her considerable talents. Clarice Assad’s Dreamscapes, with its rather blunt opposition of consonantly content and dissonantly anxious dream images, nevertheless proves an ideal vehicle for both Salerno-Sonnenberg’s rich, responsive tone and her technical brilliance, and she negotiates the neo-Schoenbergian angularity of William Bolcom’s Romanza with effortless clarity and a sure sense of direction, delivering the big, stomping ragtime tune of its finale with some deliciously rasping G-string playing. Michael Daugherty’s Frank Lloyd Wright-inspired Fallingwater draws an assertive yet lyrical performance from the violinist, and she’s vivid and direct in the character portraits of Ellen Taaffe Zwilich’s Commedia dell’arte.

Strangely, it’s the playing of her 19 string colleagues in the NCCO that can let things down – ensemble is sometimes a bit ragged, with intonation occasionally on the sour side, even if there’s an appealing swagger and confidence to their energetic performances. There’s no doubting their energy or commitment in these live recordings, though, which brilliantly capture the group’s passion and vigour in warm, rich sound.