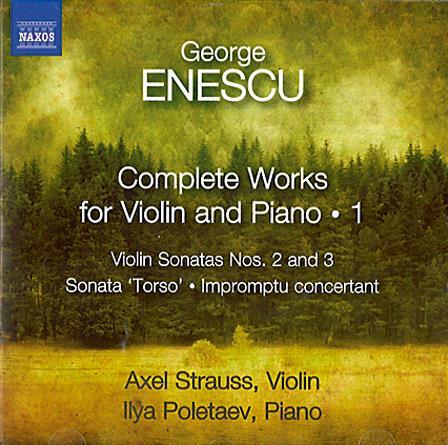 In common with many composers working in a post-Romantic idiom, George Enescu struggled initially to find his own stylistic niche, as is exemplified by the early Second Sonata that opens this fine recital. Heavily influenced by Brahms, Franck and Fauré, this is music that lacks a strong sense of structural imperativeness. Even the five-minute, chromatically intensified Impromptu concertant, dating from the same period, fails to match the quality of its invention with a sense of temporal inevitability. The remaining movement of an unpublished 1911 Sonata in A minor and the Third Sonata (the most popular of his chamber works) are both more individual in tone and organically compelling.

Axel Strauss, first German winner of the Naumburg Violin Award, and Ilya Poletaev, a prizewinner at the 2011 Enescu Competition, play this music with an emotional thrust and exultant cantabile that are highly compelling. In stark contrast to many young players’ tendency towards an exaggerated dynamic range and well-manicured articulation, Strauss soars aloft on the shifting tides of Enescu’s creative imagination, rejoicing in his ethno-musicological cross-referencing. This is by no means easy music to play, but such is Strauss’s technical command and total immersion in the Third Sonata’s gypsy-like gesturing that this is never a distraction. The recording is well balanced and physically imposing.