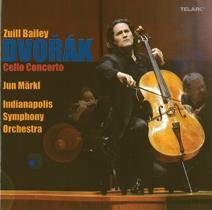 This latest release of Dvorák’s ever-popular Cello Concerto, recorded live in February 2011, boasts a fine rendition of the cello part, but the contribution from the Indianapolis Symphony Orchestra, which provides sophisticated playing for the two tone poems that fill out the disc, is considerably far from sparkling. The rather boomy recording does little to help either.

Nevertheless Zuill Bailey appears undeterred, bringing impressive warmth to the second subject of the first movement despite the glutinous bass-line, and eloquence to the nostalgic transformation of the opening idea at the Molto sostenuto. But there is little feeling of chamber-music dialogue from the orchestra in the flute and oboe solos and the woodwind generally presents a nasal concoction for the start of the second movement – here Bailey follows with nicely judged rubato that is expressive but never mannered. After a feisty and forthright opening to the finale, he serves a heady cocktail of swerving lyricism and commanding virtuosity, with some particularly eloquent playing at the close.