With vibrato the question isn't just about more or less, but also about variety of sound

It is a wonderfully expressive tool when used sensitively, but soloists especially should take greater advantage of the various vibrato possibilities, writes violist Hartmut Rohde 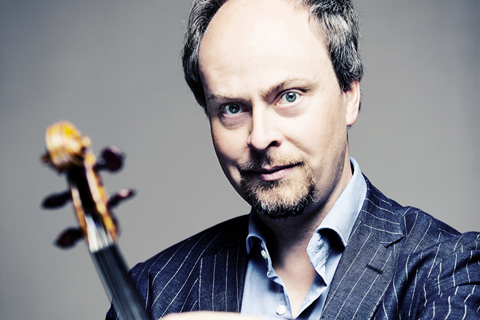 This article is from the March 2018 issue of The Strad

Oh no! Not the issue of vibrato again! For as long as vibrato has existed (ever since the first human began to sing) its use has been discussed and debated. From the wide and wobbly to ‘non-vibrato’ (an important tool that is no less beautiful), it is the concern of every musician and period-performance specialist, and should never be used without an understanding of the tastes of the composer and their time.

When measuring a bowed open string with an oscilloscope, we see a wonderful sine wave, revealing the amplitude and frequency of the note. Every note played with a stopped finger should register similarly, provided that it is played in tune. The oscilloscope shows upper and lower vibrations surrounding the centre of the pitch – and I believe that vibrato should follow the same pattern. As string players, our vibrato should oscillate around the pitch, not simply below it. If our vibrato is balanced, we will achieve a naturally ‘enhanced’ sound – not unlike the colourful and melodious human voice.

It is commonly known that there are three different types of vibrato – fingertip, hand and arm. Fingertip vibrato, or ‘tremolo’, is the earliest form, from which the later hand and arm versions developed. Therefore, all types of vibrato should have as their starting point the triple contact point of the fingerboard, the string and the fingertip.

Many great artists claim that a pure vibrating sound is made by first finding the natural vibration of the bow, allowing it to breathe – the left-hand motion is simply the icing on the cake. I recommend always checking for the correct tension in the bow – that golden point of resonance is different in every one. There should be real purity of sound from the right hand, the equivalent of air in a singer’s lungs. This often requires beautiful, non-vibrato practice. The right hand may then be balanced with movement in the left – the source of our most personal and intimate voice – according to the demands of the score. In the archive of the Berlin University of the Arts there is a letter written by Joseph Joachim in 1904 in which he expresses his ideas about vibrato to his student Franz von Vecsey (dedicatee of the Sibelius Violin Concerto). He cautions against over-forcing it and advises avoidance of a constant slow and large vibrato in cantilena passages, as this is likely to sound like the ‘howling of an elderly woman’. Vecsey should instead ‘tremolate’ on those notes that require special expression.

When playing works from the Romantic period, performers often opt for a juicy, resonant and powerful way of playing, which does sound fantastic. However, this prevents variety of sound and delicacy of interpretation, which is probably closer to what composers had in mind at the time, as the Classical tradition was still an important point of reference. This doesn’t mean that vibrato wasn’t used. Geminiani loved tremolo; Bach and Mozart were fond of its effect. Of course, players did use vibrato in Bach’s time, but it was a matter of embellishment rather than a constant standard.

Generally speaking, though, soloists may take greater advantage of the variety of vibrato possibilities. In an orchestra, the string blend is more convincing if the integrity of the sound is not interrupted by a host of different vibratos. For this reason, until the 20th century, when a regular and constant vibrato began to be cultivated, ‘non-vibrato’ was the preferred practice. Roger Norrington and those in the period-performance movement are right to encourage minimal vibrato in orchestral works from before the 20th century – though perhaps they exaggerate the practice somewhat.

We can speculate as to whether Brahms, Reger and Mahler might have preferred the richer vibrated sound of today. But I am certain that they would never have chosen an uninspired overuse of ‘tremolo’, which stifles colour variety and ringing harmonies.