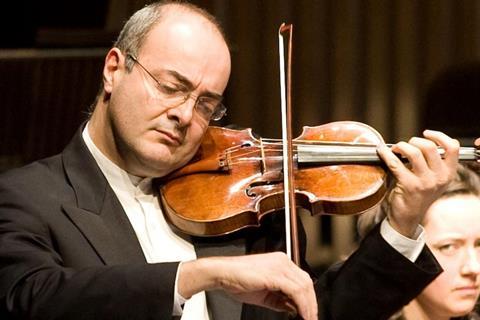 While I was at the Masters of the Bow festival in Amsterdam (see the March 2012 edition for a full write-up) I led a public discussion with violinist Gordan Nikolitch, artistic director of Netherlands Chamber Orchestra. His knowledge of bows and the subtle differences between different makers was pretty impressive, as you will see from the transcript.

What bows do you have in your collection?

I have a Voirin, one John Dodd, one Edward Dodd, four by Andreas Grütter – two modern and one Baroque – then one Simon (a very light one, a copy of a Tourte), a Lupot, a Tourte and one other school of Tourte.

Can you talk about your favourites and how you choose when to play them?

The bows that have been most instructive for me are the John Dodd and the Tourte. The first serious bow I bought was a light Peccatte. After a while I bought another heavy, wonderful Peccatte that served for quite a while. Then I bought a Sartory that I played a little and next I played with a Maire, which gave me another perspective. After a good while of searching, and a spell of using Voirin I arrived at Tourte, understanding what I had been through.

A bow maker can explain the difference between sticks more precisely, but as a player you can consider three levels of standardisation in the history of bow making. The first was Tourte – a genius. Then Peccatte, who standardised the vertical resistance – you are able to dig into the string more without being confronted with a loss of control. Then you have Sartory, whose bows have a lateral stiffness and do exactly what you tell them to. But you need fantastic experience to be able to play with a Sartory, to play games and to say what you want to say. A Tourte won’t ever do what you tell it: you have to listen to what it wants. With Peccatte, you’re able to be in the moment. There is opulence, softness and velvet, but with a fist inside.

If you’ve got such a selection, how do you decide what to play in any concert? Do you change between repertoire?

Before I started my collection I had the idea that I could use a different bow for different music or acoustics but it doesn’t work that way. Now I give my bows to colleagues and students to use. In my violin case I have the Dodd, the Tourte and a Grütter. When I play a Mozart or a happy Beethoven sonata the Grütter works well, but when I need a little bit more weight I go to the Tourte. Dodd has an interesting sound like a Viennese oboe, which has the ability to be heard – fat but cutting – so when I play an oboe quartet the Dodd has such a different sound that it can be heard by its difference rather than its power.

Some people say it’s harder to find the bow that you want than the violin – how would you say the processes compare?

In the end it comes to this: the instrument is a soul and the bow is the understanding, the ‘reason’. You might even say it’s a part of the spirit. In a sense it’s the way of thinking. You have to ‘think’ the bow, but the instrument is the environment in which it happens. You cannot go outside that environment, but the bow is the way you communicate the story. That’s an abstract way of expressing it, of course, but you control the sound with the bow.

Can you give an idea of the specifics of what you do, what you play, what you listen for, when you try new bows?

I have a friend whom I call on the phone when I can’t make up my mind. I ask him to listen as I play. Then he’ll tell me how it sounds, while the dealer is thinking, ‘What’s going on here?’ It’s not a joke – he listens to how I play and doesn’t judge the sound quality. He listens to the story I’m trying to tell, and you don’t need to have a particularly good phone line to be able to hear the story. It’s very easy to fall into the trap of judging a bow purely by the quality of the sound. Things can go really wrong in the long term, so when I go into a shop to ask for a bow, the first thing I do is ask, ‘Where does the bow take my mind to? Where does it want to go?’

Do you mean in terms of what you end up playing?

If you have ten bows you can force them to play everything at the same tempo, but a bow is like a person. Sometimes one just says, ‘Hello.’ It doesn’t mean it’s more or less good. You also want to know where it can take you. The ability to have a long-term relationship with a bow has very little to do with the amount of sound you can get out of it.

And in terms of technique – fast playing, string-crossing – do you test that in a bow or is that something that comes after you’ve found one?

Usually the second. Usually a bow that has some basic qualities can work very well in all required areas. Of course, we play spiccato, staccato, legato, and it’s true that some bows are a bit reluctant. For instance, octagonal bows have a reputation of leaving the string with a little bit of reluctance compared to round ones. You have to give them a bit more jab. You can have bows that are reluctant and aren’t very practical, but it’s rare. And you can arrange things with your bow maker, who can work out where there is too much softness or stiffness.

From a playing point of view, what are the most common faults you find in students’ right hands?

The most common thing that they do is to grab too much. Today’s playing is very much about force, and that has changed hugely over the last 30 years. I don’t know why – I’m still trying to find out. This strength in contact with the string is something I don’t like. It kills the beauty and nobility of the violin and the quality of the sound is affected. I try to help students to come to the logical conclusion that less is more.