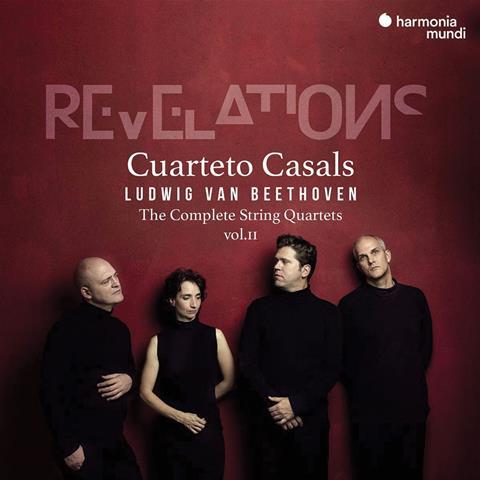 One of the first things that struck me about this second instalment in the Cuarteto Casals’s revelatory Beethoven quartet cycle is the players’ use of intonation as an expressive tool. Freed from a ceaseless fog of cloying vibrato, the composer’s bracing harmonic audacity is experienced (especially in op.132) as a series of sonic shockwaves. The other natural result of adopting senza vibrato as an expressive norm rather than a passing effect is the unprecedented textural clarity that results. As the recapitulation of op.18 no.2’s opening movement overlays (contrapuntally) a pair of pedal-points, the dazzling interplay of voices feels momentarily like a virtuoso game of musical tag.

Nothing can ever be taken for granted with the Casals’s Beethoven, and in the second of the ‘Rasumovsky’ quartets the most radical change of perspective is not viewing the composer’s middle-period expansionism as implying a fuller sound and more leisurely temporal approach. By adopting an at-times nerve-shredding, edge-of-the-seat intensity, which erupts in a finale of searing forward momentum, one can hear why even Beethoven’s most fervent admirers were occasionally left slack-jawed at his visionary audacity.

Conversely, when the interpretative anachronism of overlaying the late quartets with lashings of 19th-century expressive rhetoric ceases to be an issue (as here), the A minor Quartet flows along with a naturalness that one might scarcely have thought possible. A work that can often emerge as ‘difficult’, remote and unyielding becomes in the Casals’s micro-responsive hands a miracle of unearthly beauty, captured in sound as tactile and truthful as the performances themselves.