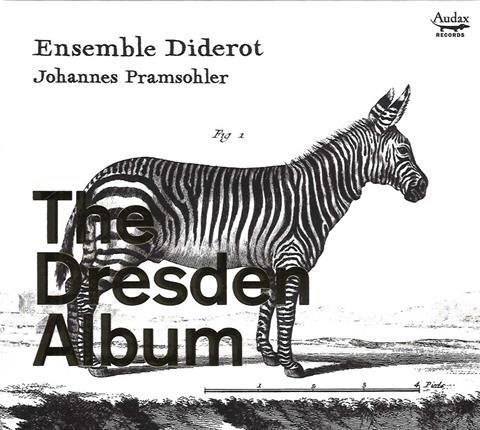 In this resonant, appropriately balanced recording, period-instrument Ensemble Diderot performs a selection of trio sonatas by composers who had associations with the Dresden court. Three world premiere recordings are featured. The ensemble’s founder, Johannes Pramsohler, and his fellow violinist Varoujan Doneyan form a well-matched partnership and indulge in some stylish, expressive dialogue, particularly in the opening Adagio and the two lively Allegro movements of Handel’s Sonata in E major. His G minor Sonata fares less well, its opening Andante lacking in natural lyricism and shape and the subsequent Allegro becoming disfigured by over-complex additional elaboration. Further, harpsichordist Philippe Grisvard’s contribution obtrudes in the same work’s Largo, as if he is in competition with his violinist colleagues’ improvised embellishments. Overzealous ornamentation also impinges on the first Allegro of Fux’s A major Trio Sonata, but rubato is gainfully employed in both its Adagio movements and its final Allegro is dispatched with aplomb.

The players demonstrate clear understanding of the affective demands of Telemann’s E flat major Sonata, particularly its opening movement, and negotiate its finale with invigorating virtuosity. They also execute with uncommon energy and imagination Fasch’s D major and TŠ¯ma’s C minor sonatas, both of which prove more inventive than their composers’ relative unfamiliarity might suggest.