The cellist, who gives our January Masterclass, shares his deeply philosophical approach to the instrument 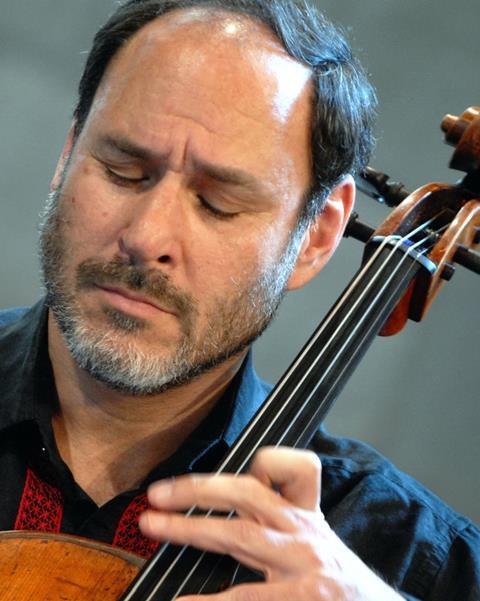 In our January issue, Gary Hoffman discusses his interpretation of Brahms's Second Cello Sonata in F major, which he performs at Wigmore Hall on 10 January, 2014. During a three-hour interview with the editor, Ariane Todes, there was much more material than we could possibly fit in five pages of the magazine, so here are some of his more general thoughts:

Brahms is not someone who goes to extremes. It’s not in his nature. There’s tremendous emotion in his music, but it doesn’t come out easily. Whereas the last movements of Mendelssohn’s sonatas can be played quite quickly, with Brahms there’s often a certain effortful quality which mitigates against this. These are dangerous statements because I wouldn’t want people to think that Brahms should always be slow and broad. However, the weight of the music and the way it moves and what’s going on inside of it suggest that the tempo can often be quite broad.

There’s something about Brahms and what he reveals in his music that makes me feel a great sense of well being. I’m sure I’m not the only one who feels that. There’s nothing arrogant in it, and at the same time it reassures. It seems to resonate with me. There’s a lot of doubt in the music and in the man, and a reticence to reveal everything. Yet in the end he wants to. There’s great discipline in the writing and always the sense that he wants to feel that everything will always be okay.

I always encourage students to get to know and play as much of Brahms’s music as possible, and to be influenced by other artistic disciplines that can help feed and open up one’s mind. All these things become part of what and who we are and we can therefore bring that much more to the experience of playing a piece. To me that’s what interpretation is, although obviously there has to be a strong musical and technical basis.

My experience with composers is that very often when they hear a performer do something they’d never thought of, they’ve loved it. So what was their intention? A composer can write something down and you respond to it, but they can’t control it. Sometimes they like how you respond to that material and even hear something in your response that they didn’t hear. In that respect there’s no right or wrong. The material takes on a life of its own. Composers have to accept that.

I don’t necessarily believe in synchronised bowings for string players. Sometimes it is a good idea but I don’t think there should be anything systematic about it because we all have different ways of getting to a similar goal. One of the problems of synchronising bowings is that people tend to think that if they’re doing the same thing as their colleagues they can stop listening. Nothing is more important than listening. One tends to get lazy in the ear if one is thinking, ‘We’re doing the same bowing therefore we’re phrasing the same way’. I don’t think it’s bowing that makes a phrase and a phrase doesn’t necessarily dictate a bowing.

Is it wrong to play something written as a single phrase in two bows because you need to build the sound? How could it be wrong? You have to find a balance between tension, phrasing, sonority – all of these things. It has to be organic. And on a practical level, what if the weather’s cold and your cello sounds a little tight that day, or you’re playing in a dry hall? Are you going to stick to the bowing you’ve chosen that’s not going to work? We should be good enough players and musicians to find something that will work to bring the idea across even if it’s not the same bowing. Therefore it’s possible to depart from what the composer writes, if it maintains the idea.

I always feel that there are certain fingerings that are very good but that might not work in certain situations. It’s important to see many different possibilities. Understand why one might prefer one or the other, and then in specific instances one can draw on those and make sense of it.

Usually tempo decisions come last. When a conductor asks me, ‘What’s your tempo?’ I feel like saying, ‘I don’t know until I start playing.’ Usually conductors look at me as if to say, ‘I can’t deal with someone like this. This is not a serious musician.’ But to me there’s no other answer. How can I know what the tempo is? It depends on so many factors. Ask me what the character of the music is and I can talk about that. The tempo is a function of the character, but also of so many other things that unless one waits to allow the music to unfold it’s hard to know what that is. Having said that, if someone says, ‘Are you saying you have no idea what the tempo is,’ of course I have an idea. We’re not talking about an extreme range here. But a conductor is not asking for an idea of a tempo, they’re talking about an exact speed, and that’s where I’m incapable of answering with any kind of assurance. Tempo comes from living with the music, thinking about it, trying to abandon any preconceptions about it, taking everything that we see into account. Then it gradually emerges: it’s a subtle process.

What does it mean when people say, ‘When I play a piece I try to play it as if for the first time?’ It’s important to take out all the preconceptions – ‘this is what I like, this is what I want to hear’. We keep changing and developing in life, but we come back and see this piece of music and it hasn’t changed. What we see in it should have changed, though, because we have something else to bring to that experience. I guess that’s what people mean when they talk about seeing something new.

I remember Leon Fleisher telling me about a passage in the second movement of Brahms’s Second Piano Concerto – a technical passage that pianists are always thinking about. He told me, ‘For years I was struggling over that passage and then I realised it was in the way I was grouping it. If I thought about each grouping in a different way, the technical problems disappeared.’ One has to be constantly open, keeping one’s brain active and feeding the soul and the mind. In the end, we’ll never be able to reach the greatness of Brahms’s music. It’s not possible. It’s greater than we’ll ever be. It’s not enough to come to the table being a reasonably decent instrumentalist and musician. That can’t even come close to revealing what this music’s about. Do I feel that I reveal what’s in this music? I don’t know, but I feel that over the years I’m getting closer to what might be there. I don’t know that I can ask more of myself than that. Is it what Brahms was thinking? There’s no way even to know that. But we pore over dots and dashes and markings and make connections with other things we’ve played and we start to get an idea.