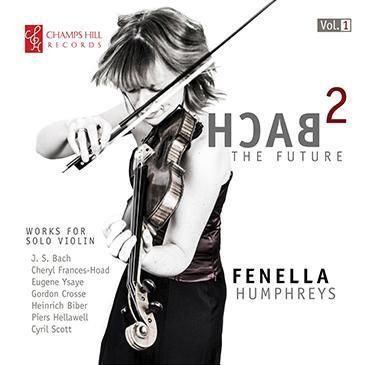 I heard Fenella Humphreys play this contrasting programme of Bach-plus at The Forge, Camden, in the late spring. On that occasion there were some spots of weak intonation and double-stopping, of which there are no signs in this airy studio recording, made some months earlier. Humphreys shows impressive conviction in linking Bach’s Third Partita to related commissions by Cheryl Frances-Hoad (Suite no.1) and Gordon Crosse (Orkney Dreaming). The forms of the new works similarly contrast dances with grave meditations, and Bach lies behind their harmonic rigour without suffocating their own language. The most impressive playing is of Ysaÿe’s Solo Sonata no.2 and its obsessive reworking of the Prelude from Bach’s Partita. The Malinconia is properly muted but still plangent: she plays right into the instrument’s body as if she had been listening to the sonata’s dedicatee, Jacques Thibaud.

The Passacaglia from Biber’s Mystery Sonatas is done boldly senza vibrato on the same modern set-up as Balcony Scenes by Piers Hellawell, who uses an arcane Baroque device to construct an imaginary dialogue of upper and lower voices without resorting to cheap tricks of timbre. It’s testing music, and Humphreys is triumphantly on her mettle. Cyril Scott’s Bumblebees may have nothing to do with Bach but it makes a marvellously quirky sign-off, buzzing hither and yon in configurations far more true to life than those of Rimsky-Korsakov’s well-ordered Flight.