Advice on unforced and resonant chord playing from The Strad's archives 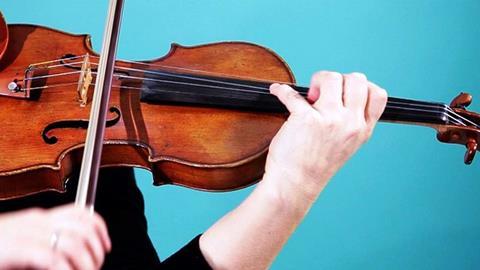 One of the greatest difficulties experienced by the student consists in making the chords resonant and yet free from impurity of tone. They are apt to sound scratchy. The best way to correct this fault is to avoid pressure at the impact of bow and string, and to press only while the bow is in progress. Once this habit is formed it becomes quite natural, and purity of tone is thereby ensured without loss of power.

Near the fingerboard, chords can be played with a faster, lighter bow; but as you play nearer to the bridge, you can play with a slower and more sustained bow. With the right point of contact near to the bridge, it is possible to sustain three strings at the same time for several seconds.

Although chords sometimes do require a lot of bow, often they can be played with very little. You can even play chords with a heavy spiccato stroke at or near the point of balance.

As for chords, what poverty the music suffers if they are always played forte! We must divest chords of their aggression. They do not always serve as punctuation; most of the time they simply provide harmony. Try playing them in many styles: rolled at various speeds, with and without crescendo and at all dynamics. Try even caressing them as lyrically as possible.

A careful study of the technique of chord playing is of inestimable value to the whole technique of bowing, for it develops sensitivity and subtleness in the hand and arm.

Pivoting is the movement of the bow around the string. At the same time as sustaining an up or down bow on one string, pivoting gradually brings the bow closer to an adjacent string. To pivot smoothly the bow must always begin to move towards the next string before you want to play it. The later the pivot, the faster it has to move. Pivoting enables seamless string crossings without accent or disturbance. Pivots are essential in chord playing, joining together the bottom and top halves of the chord to create one, unbroken sound.

The essence of the art of chord playing: the strings are not touched at the same time, but they must sound simultaneously.

The weight that the left-hand fingers have to provide in order to stop the string sufficiently for a clean note is the same whether you are stopping one note or four notes. Excess pressure in stopping strings, as an unconscious reaction to the extra weight in the bow when playing double stops, is one of the most common causes of left-hand tension.