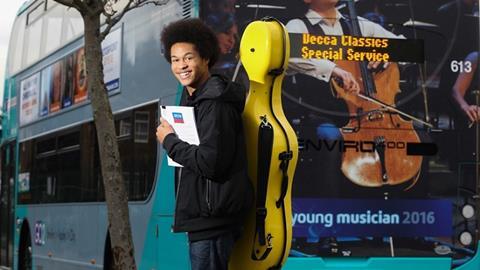 Decca Classics has signed a 'major new record deal' with 17-year-old cellist Sheku Kanneh-Mason - winner of BBC Young Musician 2016 and the first black musician to win the award in its 38-year history. The British musician's first recording will feature Shostakovich's Cello Concerto no.1, the piece with which he won the BBC contest.

'It is a great honour for me to be joining the Decca Classics family and following in the footsteps of great artists like Mstislav Rostropovich, my musical hero,' said Kanneh-Mason. 'I’m excited to take the next step on my journey and look forward to bringing my passion for classical music to a wider audience.'

Decca Classics managing director Dr Alexander Buhr commented: 'Sheku is an astonishingly gifted young musician with incredible energy and a burning passion for his music. We are thrilled to be partnering with Sheku to help foster his remarkable talent through ongoing support for his musical studies and opportunities to record with leading artists. I can't wait to see him grow and develop in the coming years and we will be by his side every step of the way.'

The Nottingham cellist signed his record contract on board his own bus, named after him by the City Council following his BBC Young Musician triumph.